California faded slowly behind us as we made our way up Highway 101 toward the Oregon coast. It was with a mixture of sadness and excitement that we left the Redwoods and the state that had served as our home for the past two years. 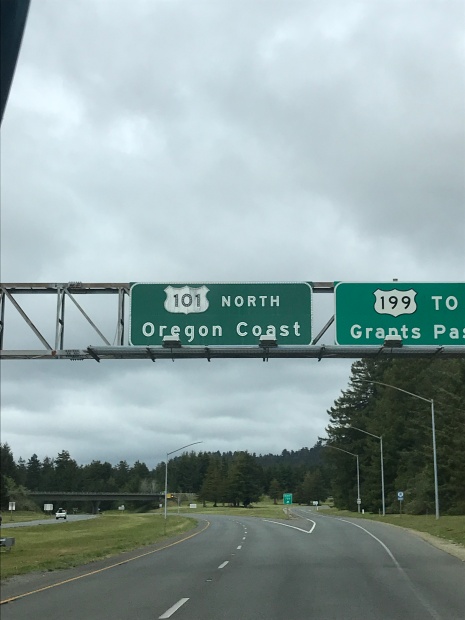 The overcast skies had us missing the sun of Southern California, but we were ready for our next adventure. Entering into Oregon, we had to stop at the watercraft checkpoint because of our kayak. I’m glad Andy was paying attention because I would’ve driven right by — the kayak didn’t even cross my mind.

After a brief interview of the last place it saw water (La Jolla), we were back on our way. On the journey to our first Oregon camping spot, we stopped by to see some land for sale that we were interested in. Poetically enough, it was on a road called “Green Dolphin Way.” Unfortunately, it was not going to work out for us. The land was basically a cliff that dropped steeply into a wooded valley — no way we could park our Wandering Dolphin there! 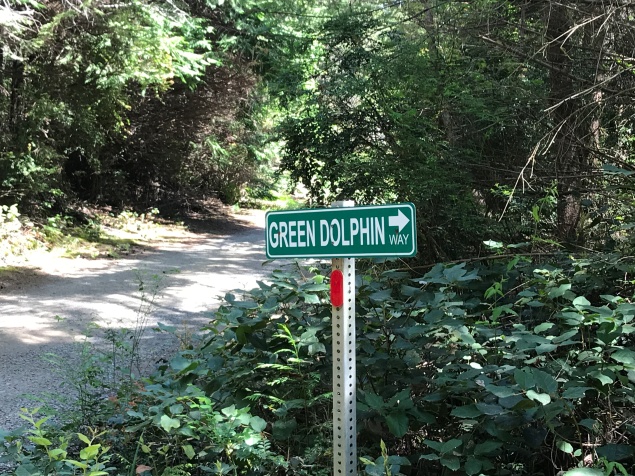 We were back on the road once more.

When we left Minnesota the first time, it was in fall, so we weren’t battling for camping spots against the spring travelers. This time around, we didn’t have that luxury, and our initial plans were going out the window. It had started with our camping spot in the Redwoods, and it seemed it would follow us into Oregon, as well.

We hadn’t booked anything after the Redwoods — we just went on our way and figured that we’d find a place when we were sick of driving. But it was a bit more stressful this time. The busy camping season meant that many places were full, and the ones that weren’t were often more expensive. State parks (our preference) are typically cheaper and more beautiful, but they book up faster for these very reasons.

We found a beautiful national park that had a ton of open campsites. The only problem was that they did not have power, and we wanted to stay someplace for a few nights and not have to worry about Pica getting too cold. We couldn’t find any rules on generator usage. There was one unmarked site that had hookups, but we learned quickly that this was an empty host site and not for rent.

Still, it was a beautiful campground on a lake, and we want to come back in the future.

We ended up finding a campground outside of Florence, Oregon that could take us for two nights. But they were too booked up to take us for any longer than that.

Though the sites were close together, there were thick bushes in between each one that gave the illusion of privacy. It really wasn’t bad at all. Plus, we found out that they had really awesome showers. I had forgotten what it was like to have real water pressure. Wow. It was our first time taking showers outside of our own on this trip, and we had to break out our shower basket and flip flops. Back to college it is!

We did run into one issue on this portion of the trip…we found out that our gray water tank was leaking. After picking up some sealant, Andy set to work fixing it. It took a bit of time, and it was quite the headache, but eventually, it got taken care of (though he did say that if we were at home, he’d have ripped out the whole pipe and just replaced it).

Let me just say that the Oregon Coast is one of the most beautiful places I have ever traveled. The mix of greenery, rocky and sandy shorelines, calm and angry waters, tree-covered foothills, relaxed atmosphere and everything else, makes it like nothing else on this earth. I drank in the scenery with my eyes, only realizing later on that I never took one picture. The beauty will have to survive in my memory.

Florence was a really cute little town, and we grew to love it quickly. Since things were booking up so quickly, we decided to head into town to visit the local Starbucks for their internet so we could plan out our upcoming stops. Memorial Day weekend was sneaking up on us quickly, and we didn’t want to get stuck staying in a Walmart parking lot. As much as we just wanted to fly by the seat of our pants, we didn’t have that luxury when traveling during peak season. 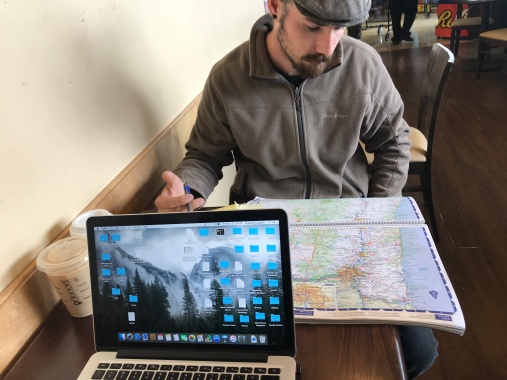 We set to work and booked our next few camping spots.

Then it was time to have a little fun. 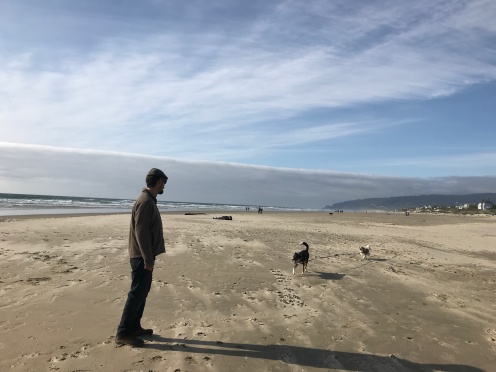 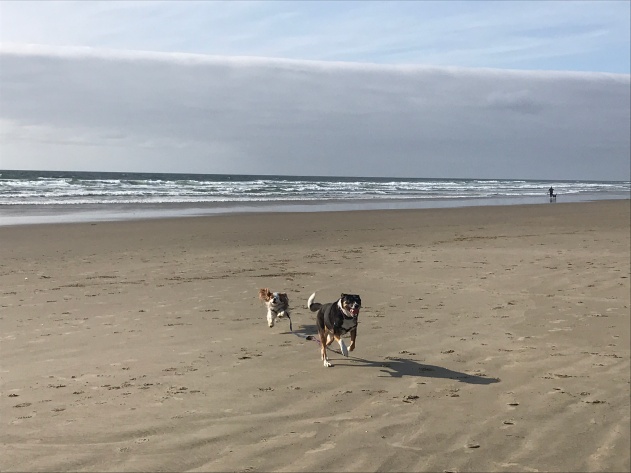 In addition to driftwood, we saw a lot of crab parts along the beach. And something we thought looked suspiciously like Portuguese man o’ war. Not positive, and we tried to look it up. Getting Piper to stop trying to put them in her mouth was interesting.

The next morning was time to leave, but before we got on the road, we took the dogs for one more walk along the beach. We were planning to drive north and stay outside of Seaside. Had I known that this was going to be my last close encounter with the ocean before we left the West Coast, I would’ve done things differently. I would’ve said my proper goodbyes to the place that I love, the place that holds my heart.

“…the sea, once it casts its spell, holds one in its net of wonders forever.” — Jacques-Yves Cousteau

Perhaps it’s better that I didn’t know this was the last time. Perhaps it’s easier not getting a chance to say goodbye.

“If there is magic on this planet, it is contained in water.” — Loren Eiseley

We drove north to a spot just outside of Seaside, another RV park. They could only take us for one night, but that was just fine with us. Our whole goal was just to see the entire coast — we only needed this place as a pitstop to rest before our journey into Washington. We didn’t even bother to unpack.

It ended up being another cute little town. We drove around a little, and I unknowingly got my last far-away glimpse of the ocean.

The town had a brewery, so, being the people that we are, we went out for dinner and a beer tasting at Seaside Brewery. It was a cute place, situated in what was once the town’s jail. The food was decent, the beer also decent, but nothing wowed us. 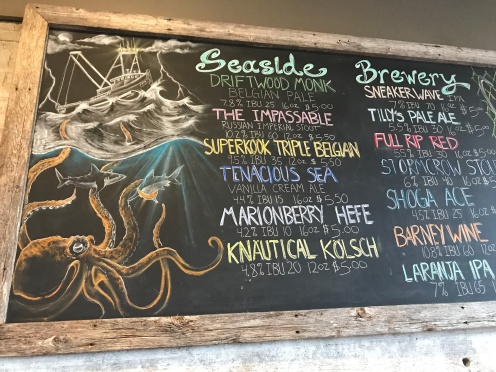 We headed back to the RV park — Bud’s RV Park and Campground — and took advantage of their hot showers with amazing water pressure.

After our quick overnight stop, we were back on the road and heading into Washington, where we had a list of plots of land for sale to visit.

As we headed over the bridge from Astoria into Washington, it finally hit me that I’d had my last ocean experience for the foreseeable future, and I felt my heart break a little. A piece of it will be left behind, awaiting my return.

I hope so. I really hope so. 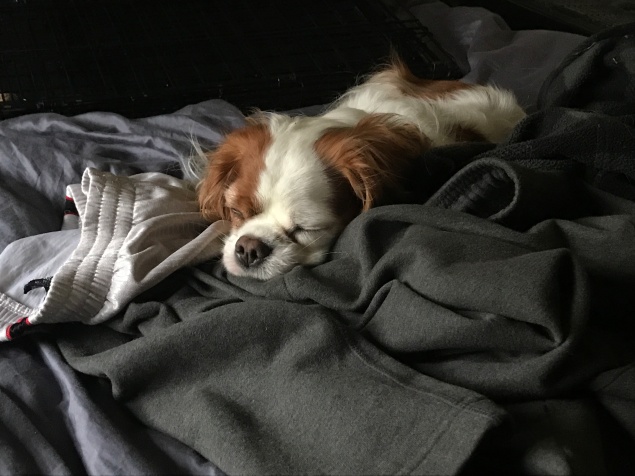 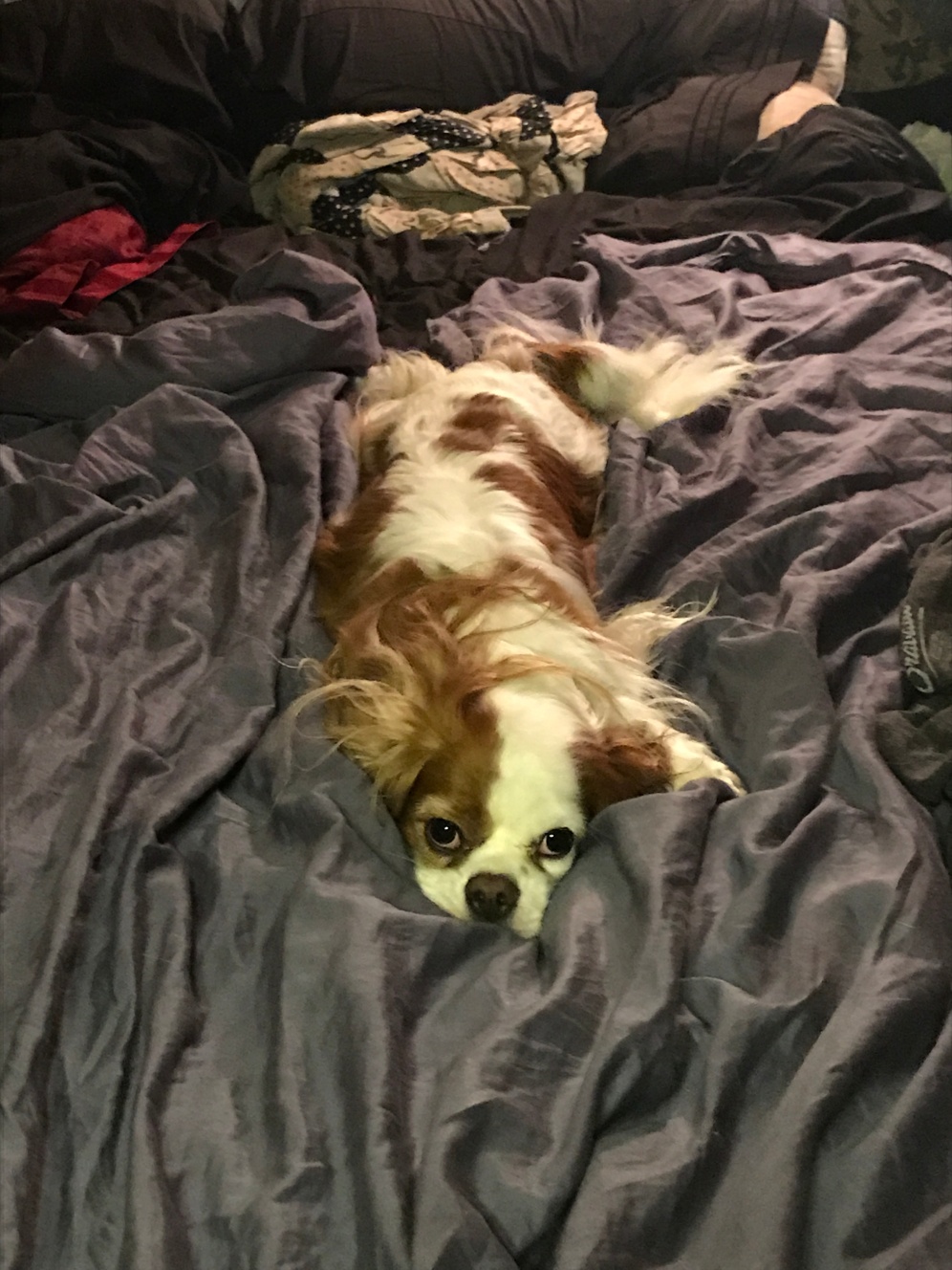