Life in a motorhome or tiny house puts your lifestyle on a smaller scale (obvious, I know). It can also decrease the size of your activities because the amount of “stuff” you have has been downsized.

Living and traveling in a motorhome has been amazing for countless reasons. But part of me misses the perks of having more space. More space for aquariums, specifically.

I’ve mentioned this probably too many times, but I love water. And animals. Working for PetSmart for more than a decade gave me intimate access to the pet hobby — and the aquarium hobby.

In our house, we had four aquariums (because I was just a little bit into the hobby). We kept a 4-gallon betta tank in the kitchen, a 46-gallon saltwater-turned-native Minnesota fish tank in the dining room, and a 75-gallon tropical fish/eventual turtle tank in the living room.

We also had a 75-gallon South American tank in the family room/office.

I’ve mentioned these guys before, but they lay the groundwork for our most recent project.

Andy noticed this little 4-gallon tank at a friend’s house. It sat in the corner, unused and covered with dust. He mentioned it to me, and then life went on. A couple of months later, we were at the house together, and the topic of the tank came up again. The owners had no immediate plans to set it up, so we made them an offer. And thus began our journey into another nano tank setup.

We currently live (and traveled with) a betta in a large jar-like container.

It’s a nice setup because it is very easy to travel with. We drain out part of the water and refill it when we get to our next camping spot from a jug we keep with us. Now that we’ve been parked, cleaning it is even easier.

When we moved into the motorhome, we felt naked without a fish to keep us company. That’s how the whole thing happened. And now it has spiraled.

When Andy told me about the tank, I thought he wanted it for his aquaponics setup. I had no idea he was looking at it for me to have a little fun with! When I found out, I was ecstatic. But I was also worried at how we were going to travel with it. I mean, four gallons is not a lot, but it kinda is in a traveling motorhome (especially because we won’t always have electricity).

After we bought it, I spent the first couple of nights thinking about how I was going to make this work. I wanted a plan that would be functional for life on the road. I fell asleep with thoughts of the new aquarium, woke up with new ideas, and spent the days reading articles online to spark my memory of what I already knew.

I pitched my ideas to Andy and got started.

I spent an afternoon tearing apart the new tank, disinfecting and cleaning everything, and making sure all of the pieces worked (it would’ve been a terrible deal if things hadn’t worked!).

I tested the pump for the filter in a bowl of water. Success!

I tested the lights. Success!

Everything seemed to be in order. Next step, check out some local stores to start pricing things. We wanted to keep it inexpensive.

We knew the tank had been originally set up as a saltwater tank, but that’s not what we wanted to do (we still had our betta to think about). We found out that the lights that came with the tank were made for saltwater. Might not work for our plan, but we were going to try.

We ended up coming home with fluval plant substrate, a couple of live plants, and filter accessories. We put in the new substrate, along with some water from the betta tank, planted the plants and filled it up!

We let the tank sit for a couple of days, allowing it to clear up. Then we added our betta (whose name is Richard). 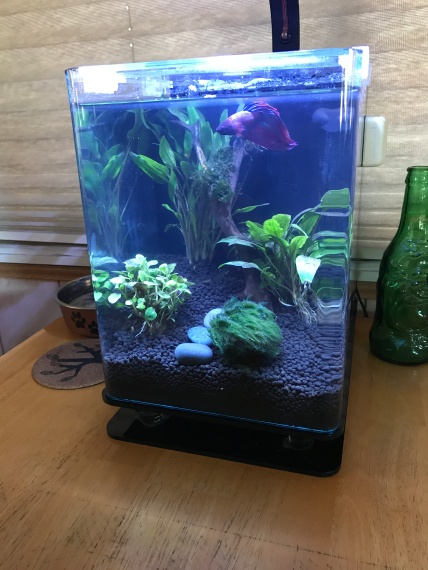 We knew immediately that the light was probably going to be a problem. The spectrum was all wrong for a freshwater planted tank. And even though the bluish hue looked cool, we were going to have to change it out at some point.

We’d looked at a light while we were at the store, in preparation for probably needing to buy a different one. After we were all set up and we knew we’d need one, we did a little research.

Because we’d gotten such a good deal on the tank, the light was going to end up being more expensive than the rest of it. It sounds silly, but we knew it was important.

Over the next week, we kept an eye on things and watched as our betta flourished in the new tank, exploring each crevice and swimming through the plants.

Today, I went back for the new light. A Finnex planted ultra-slim LED cliplight.

The spectrum is certainly different, the bluish hue gone from the tank. But Richard’s colors just pop under the new light. (It does have a blue nighttime setting that’s pretty awesome.)

We’ll keep the old tank for any needs we may have while traveling.

We are both excited to add more to this one, to truly make it a planted tank the way we envision it. Eventually, we will get a CO2 system set up, as well (though not any time soon since they are pricey).

The tank really pulls the living space together nicely, and makes for an awesome light in the evening. 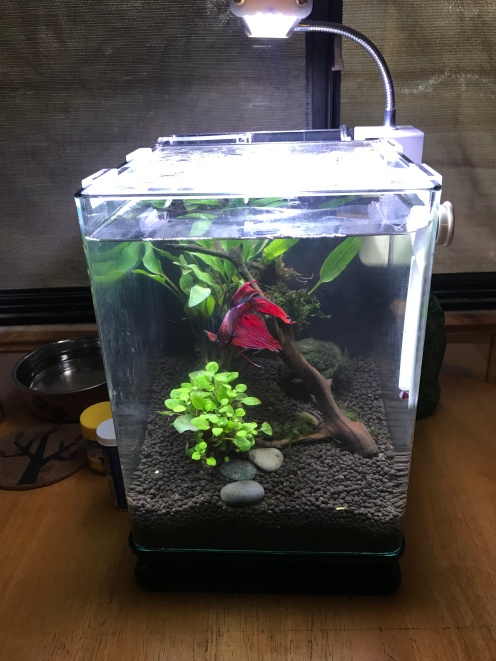 And another perk? Ellie can’t get enough of the new tank! She can watch it for hours at a time. She’ll really love it when we get some more livestock in it!