It seemed almost too soon that we were back on the road after only a little rest, but we were excited for our next destination. Before leaving Fort Bragg entirely, we stopped by Noyo Harbor, which bills itself as “one of the West Coast’s most scenic harbors.”

After a quick stop to get some smoked fish for the trip, we were back on the road, heading north to the Redwoods.

The first part of our drive, along Highway 1 toward 101, was white-knuckle. I could not look toward the edge of the road at all because I was almost sure we were going to go off the side. Snaking our way through towering trees and alongside steep cliffs, we drove on a road that had no shoulder and seemed too narrow to fit our RV in some places. Somehow, Andy made it safely and with a cool head. I’m sure I would’ve run us into a tree.

We were about to get onto Highway 101 when we saw a sign for the “Drive Thru Tree.” We’d heard of this before but thought it was further north. “World Famous,” the sign said. So we had to go.

We checked in at the entrance, and the man told us we wouldn’t fit through the tree but that we could still go down to see it. Well, we had to see this thing. He directed us along the private road, instead of the main road, since we wouldn’t be driving the RV or the Jeep through the tree. 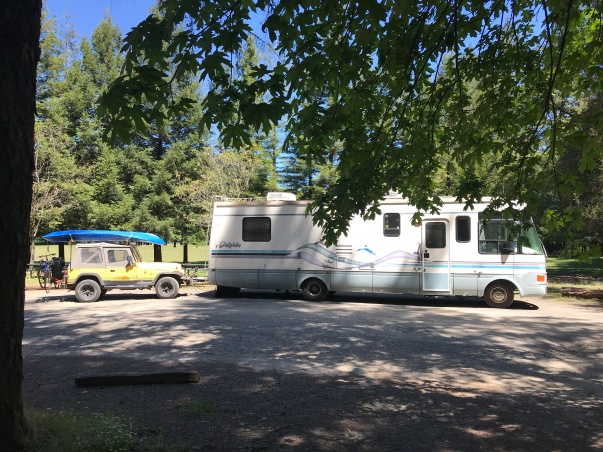 We parked and went to see the monstrous tree. 2,400 years old!

We watched several cars drive through it and determined the guy was right — the Jeep wouldn’t have even made it through. It seemed…wrong somehow. Wrong that a tree would be carved apart in such a way for our entertainment. But it was still quite amazing to see. 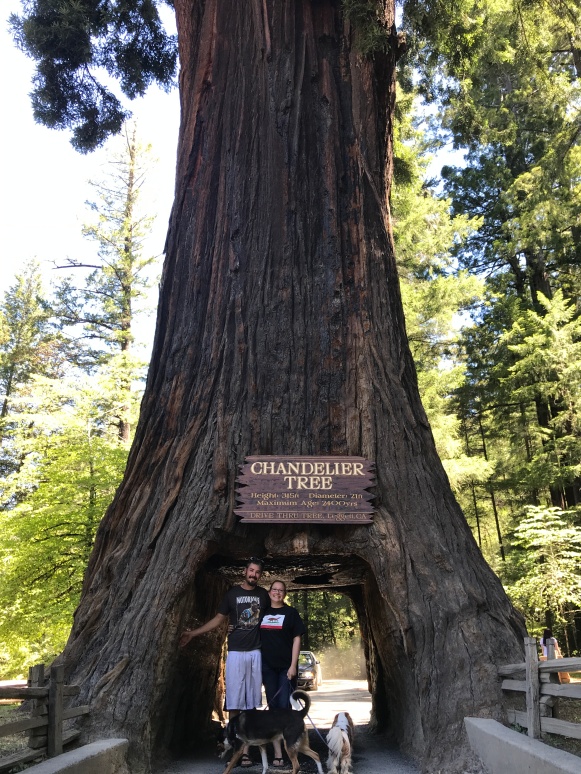 We let the dogs run for a while and explored the area before getting back on the road.

The rest of our drive was just as amazing. Highway 101 offered us a wider road to drive on, but the views were nothing short of outstanding. Open, expansive ocean views; river crossings; enormous redwoods. 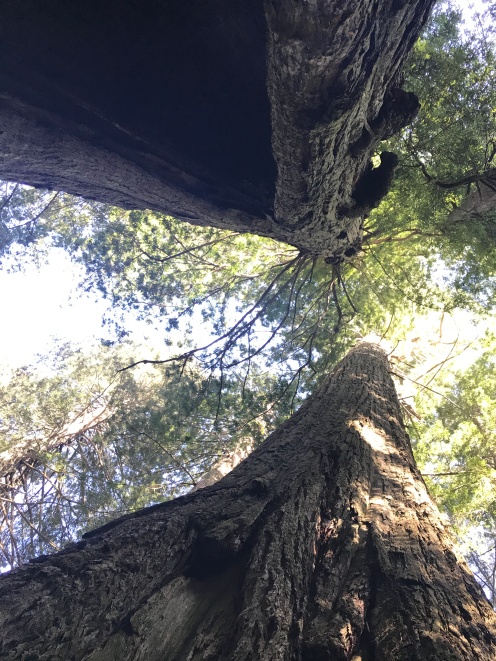 We were smitten and excited to see what our next camping spot was like.

We had originally planned to stay in a state park, but when we called for reservations last week, they were already booked up. We ended up booking a spot at the Redwoods RV Resort just north of Crescent City and about 12 miles from the Oregon border. 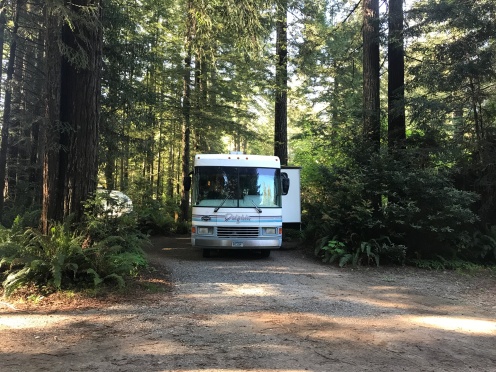 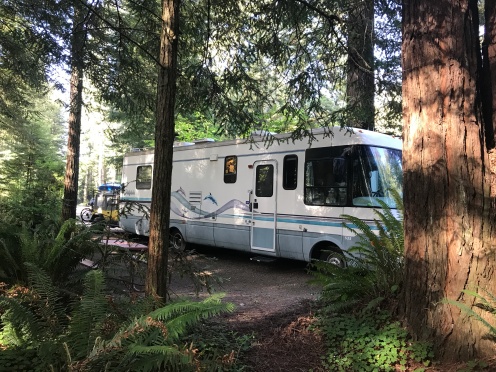 It was a little more expensive, but our site was beautiful. We were surrounded in all directions by ferns and towering trees.

The next day was Andy’s 30th birthday. His wish was to be in the redwoods to celebrate, and we made sure to make this happen. We stopped at the ranger station in Hiouchi to see what hiking trail we should venture out on. After getting some directions, we set out.

Our first task was to find Howland Hill Road, a dirt path that was not recommended for low vehicles. Luckily, we tow a Jeep — the perfect vehicle for such an adventure!

I have watched many different nature shows and seen many photographs of the redwoods, but seeing them in person is incomparable. It was one of the most amazing things I have ever seen in my life. 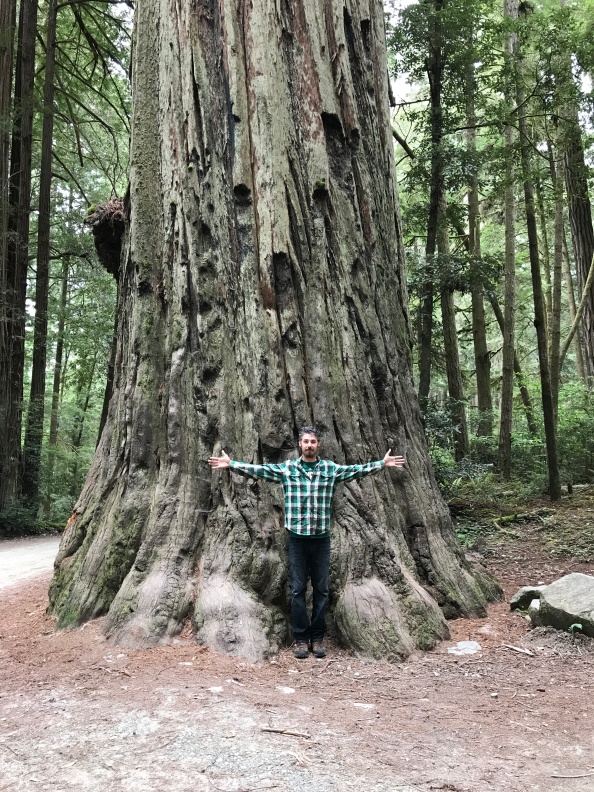 “It’s not only their unbelievable stature, nor the color which seems to shift and vary under your eyes; no they are not like any trees we know. They are ambassadors from another time.” — John Steinbeck 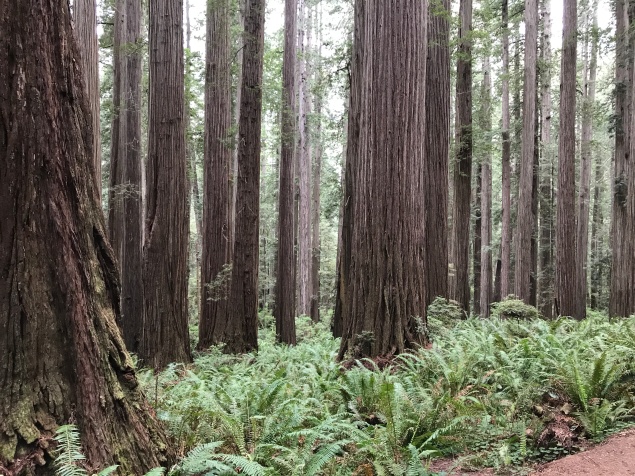 A Few Tidbits About Redwoods:

*Redwoods are the tallest trees on earth and can grow more than 300 feet tall and live for more than 2,000 years.

*They have been around for about 240 million years.

*Their root depth ranges from a few inches to about six feet deep, amazing for such a large tree, but can expand to about 50 feet or more in diameter.

*Coast redwoods (the largest species of the three) grow only on the Pacific coast, between Big Sur and Southern Oregon.

*They are extremely resistant to insects, fire and rot.

We found our trailhead and set off into the woods to see the “Boy Scout Tree,” apparently one of the largest in the area that is easier to get to. And by “easier” they mean you still have to hike nearly six miles. But we’d prepared for a day of hiking by packing a ton of water and snacks.

Still, it was rough at times.

It was stunning to be surrounded by such amazing plants, things we couldn’t even see the tops of most of the time.

For the most part, the trail was pretty easy going. There were a few hills and trip hazards, some slippery spots, but nothing too crazy. Our hikes in SoCal had prepared us for this — and at least here we didn’t have to deal with the sun and the heat! However, the sounds of buzzing flies was all-to-familiar and reminded us of Minnesota. The only difference: we didn’t get bit once.

It’s size was almost incomprehensible, and the photos certainly don’t do it justice. 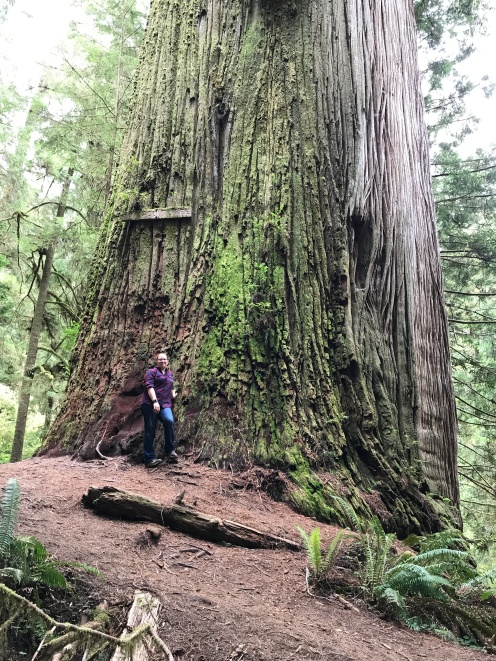 I’d say it was definitely worth the hike! We continued a little further down the trail to see Fern Falls. Along the way, we found a couple of critters — one of them the infamous banana slug, which is apparently the second largest slug in the world and can grow up to 10 inches! The one we saw was just a baby, about the size of Andy’s thumb.

We eventually reached the falls.

The sound of trickling water was a wonderful accompaniment to the surrounding forest. But it was soon time to head back out.

In total, it took us about three hours round-trip. Not too shabby when you consider how much time we spent looking at the trees!

That night, we went out to a local brewery called Port-o-Pints for dinner and a beer tasting. It was a fantastic end to the day and a great way to spend Andy’s birthday!

We “took a zero” the next day (the hiker’s way of saying that we took a day of rest). After weeks of work, prepping for the road, seeing friends and family, doing all of our favorite activities, and traveling, we were officially pooped. We needed a day to relax. But I was a little sad to spend our last day in the redwoods just reading in the RV. I convinced Andy that we should spend an extra night in our camping spot so that we could take the next day to explore some other places because I had not had enough.

So yesterday, we set out to explore some more.

We stopped by Klamath River Overlook because we were told you could often see whales passing by. 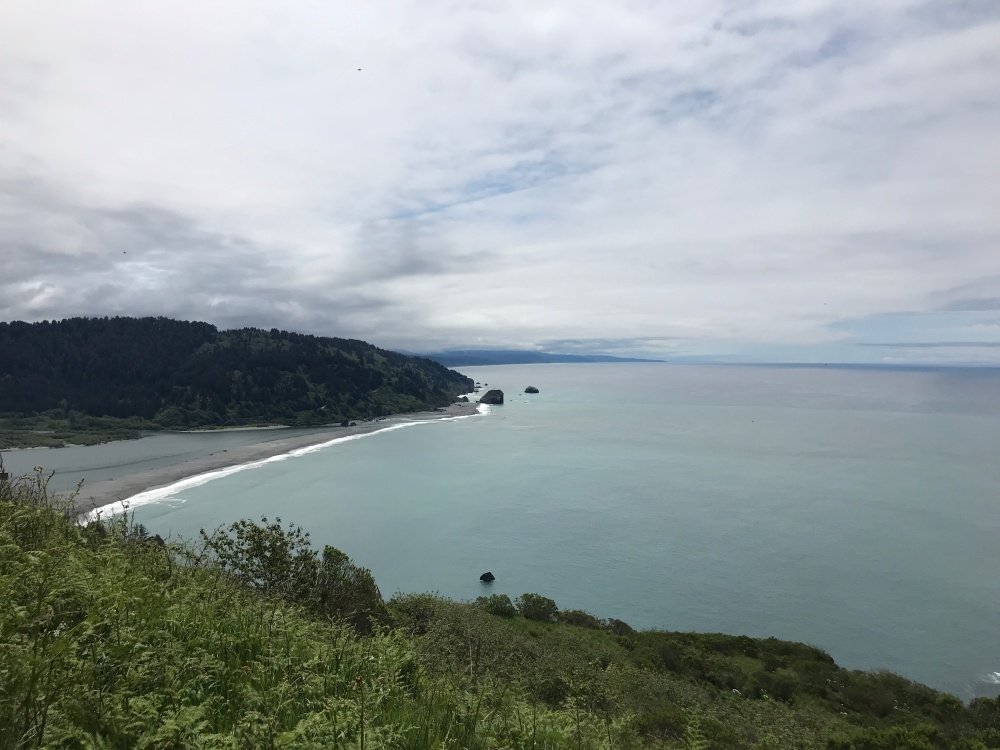 We didn’t see any whales but the views were amazing.

Then we headed down a scenic road we’d passed on our way up. It was a beautiful drive through the redwoods, and we ended up seeing some elk on the way. 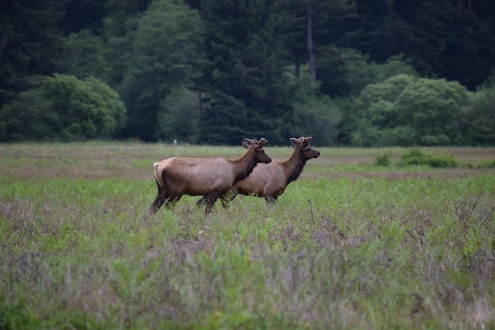 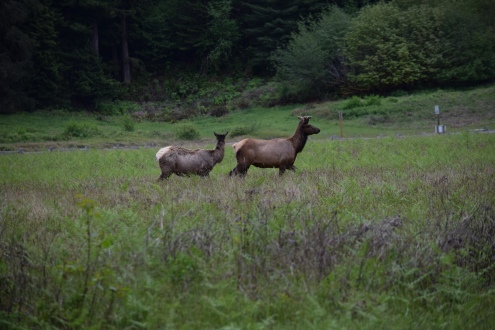 Then we headed back up to the same overlook to see if any whales had popped up. 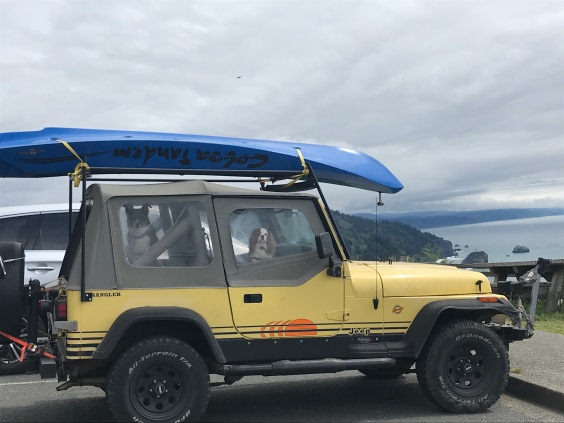 Nothing. But we saw some splashing near the mouth of the river through our binoculars that Andy thought might be dolphins. So we set off to find out if we could get any closer and determine what all the activity was.

We crossed to the other side of the river and followed a narrow path to the beach.

It had just started to sprinkle as we made it to the beach. We could hear the seals barking.

The splashing and fins we had seen from the overlook turned out to be the seals hunting near the mouth of the river. Not dolphins, but it was still fun to watch!

As we set back toward the Jeep, we realized that we really were in bear country. There were bear-resistant trash and recycling containers and signs everywhere. 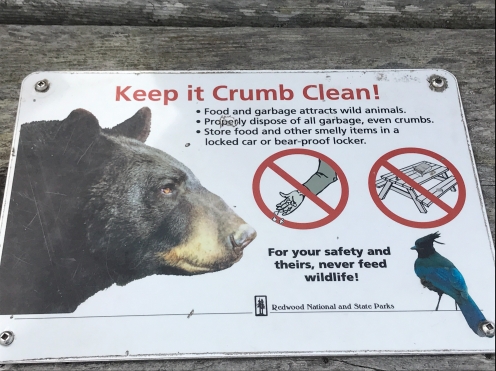 Not to mention the gold bears at the ends of the main bridge.

We were all set to pack it in for our next adventure when something happened with not one but both dogs. Piper had been fighting a weepy, irritated eye that was not getting better even though we flushed it. And Teddy, well Teddy had something big going on with his foot.

It looked like an abscess of some sort, but we didn’t think there were any foxtails around here the way there were in SoCal. We thought we were beyond that point. But it looked pretty bad, and we knew the best bet would be to take them to the vet. The RV Resort agreed to let us have a late checkout at no charge so that we could take them to the vet this morning.

Piper’s eye was OK, just irritated. The doctor said we already had the right meds at home to help her out (thankfully I keep stuff like that).

And it turns out, little Teddy did have a foxtail in his foot, but it was so imbedded and covered that we never found it while checking his feet (which we do every day, ever since his first one when we first moved to Ramona). They had to sedate him and lance the abscess, and now he’s on meds and getting regular foot soaks. 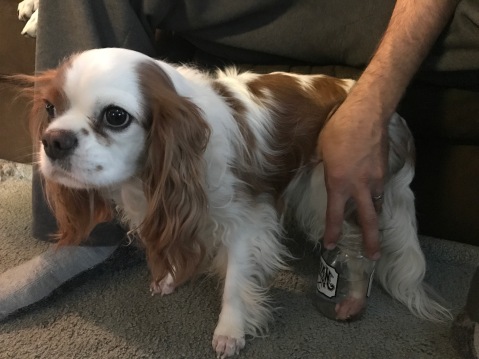 Since they had to sedate him, and he had such a rough day today, we determined that it was best to stay one more night — no need to stress him out with travel and take him further from the vet if we need something.

As long as things go well overnight tonight, the plan is to head out tomorrow morning. We will finally get to see Oregon for the first time! We’ll be checking out some different areas and taking a look at some land to see if Oregon may be the future resting place for the Wandering Dolphin.