Let’s start this off by saying that Southern Washington is B-E-A-U-TIFUL. After crossing over from Oregon, we followed the river until we reached the first plot of land we wanted to see. We’d decided not to travel too far from our last Oregon camping spot so that we could see some land along the way. We stopped at a couple of different places before getting to our campsite at Seaquest State Park.

We’d decided to spend several nights here because we wanted to see multiple properties in the area and have time to go into Portland. We’d booked the last available site, which didn’t really give us any options. Though we were in the woods, it felt kind of like an RV park the way all the RVs were situated around us. A little surprising from our previous state park experiences. We were beginning to learn that not all state parks were amazing and not all RV parks were terrible.

After parking and setting everything up, we headed out to see some more land. Driving through the small towns of the area, we looked for signs that they’d be happy places for us to live close to. This part of Washington reminded us greatly of Northern Minnesota — but with different trees, more ferns, and much larger hills.

We spent the first day and a half looking at different properties. Most of them were not what we were looking for, but a few of them showed promise. On our first night in, we hung out with some neighboring campers and had a bonfire. They were from Washington, closer to Seattle, and were great company for an evening.

We took a day to head into Portland and see the city since we’ve never been there before. It had a great vibe, and we liked how it was laid out. We especially thought the amount of public transportation was pretty awesome.

Not surprisingly, we decided to stop by a brewery while we were in town. 10 Barrels Brewery.

Not only was the food absolutely delicious, but their beer was very impressive, as well. After a large tasting, I settled on a favorite: their coconut stout. Yum.

We headed back home, but not before we stopped at a few more properties. I have to say, one of my favorite properties happened to have an old home on it that needed quite a bit of love. But I could see the potential. And it would make the perfect haunted house for Halloween!

We spent a total of four nights at Seaquest — and each night we took the dogs for a hike around the trails on the property. It was beautiful. This was our kind of land.

We didn’t have much of an excuse not to hike — not that we needed an excuse — because there were trails right off the front of the motorhome. 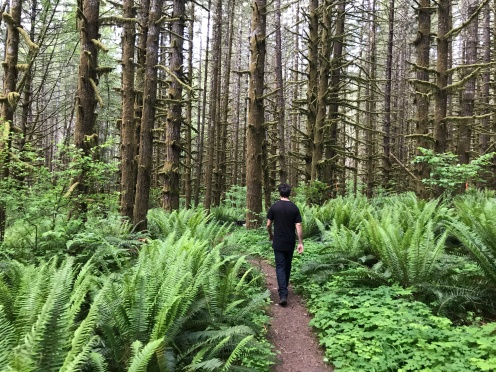 We took a walk down to the Mount St. Helens visitor center, which turned out to be a bust because they wanted $10 just to see a timeline and 13-minute movie. No thanks. But there were nice views of the mountain.

It was a great place to relax for a few days, but we were soon on our way again. This time to Wanapum State Park in northeast Washington. The drive was just phenomenal — at least the first part was.

As soon as we got closer to Seattle and started heading east on Highway 90, we hit snow-capped mountains and saw snow-fed lakes and streams. It was amazing.

Once we passed through the Cascades, we were in a little bit drier country, with rolling fields and fewer trees. Still pretty in its own way, but it seemed ugly compared to what we had just driven through. 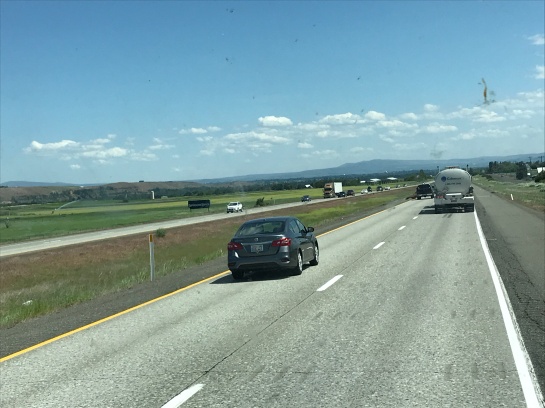 We spent just one night at Wanapum, but we made the most of it. Our campsite was in a pretty barren area, but there was a lake/reservoir nearby. 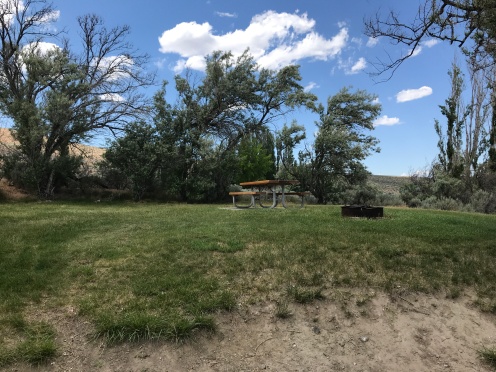 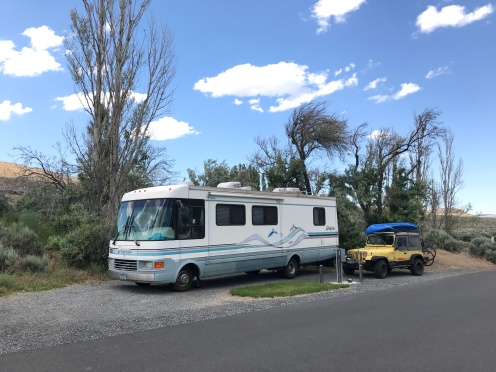 Teddy had his very first boating experience, and he did amazing!

Afterwards, we decided to hang out in the grassy area of our campsite. We spread out a blanket and brought some pillows and books.

Though it was warm outside, the breeze kept us cool in the shade of our single tree. The dogs had a great time relaxing, and we thought it was a good opportunity to let the cats explore a bit, too. 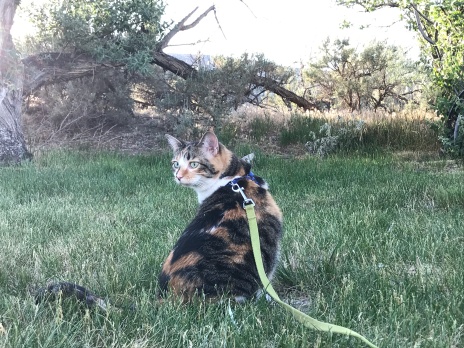 Though our campsite was not secluded in the slightest, we felt as though we had a private space in our grassy area because we were up on a little hill with the RV blocking us from the road. It was peaceful and the perfect spot to finish my second book of the trip.

We hadn’t bothered to unpack, so we were back on the road bright an early this morning. Heading into Idaho for Memorial weekend.