We realized upon leaving our campground in San Simeon that we were in a pocket of green beauty. When we got back on the road, we were once again driving through flat agricultural land and entertained ourselves by watching the many fields of vegetables pass us by.

Our next destination was a mere 138 miles from the campground — our shortest drive of the trip — and was at a KOA in Salinas. We planned this for a couple of reasons. One: I wanted to see the Monterey Bay Aquarium (it’s on my bucket list). And two: it broke up the first day of driving into one long day and one short day.

Finding the KOA was easy. But getting into it was not.

We’d made a reservation prior to our arrival, telling them what type of coach we were driving. They booked a back-in spot. OK, most of our spots are back-in sites. But most of them don’t have a gigantic lip leading into them. That’s a problem for us because our rear wheel base is set pretty far forward (to help us manage hills).

So, what did this mean?

This meant that in our first two attempts at getting into the site, we almost bottomed out the back end of our RV, and we did lightly hit our rear right leveling jack on the pavement (which could have set us back thousands of dollars if it had been damaged).

I was the runner. I ran back and forth from the RV to the office, trying to find out what other sites we could try.

They were all terrible.

We ended up in one of the larger pull-through spots at the far end. The sites that didn’t have a bit of greenery between them (not that the other ones were really that great, but it was something). 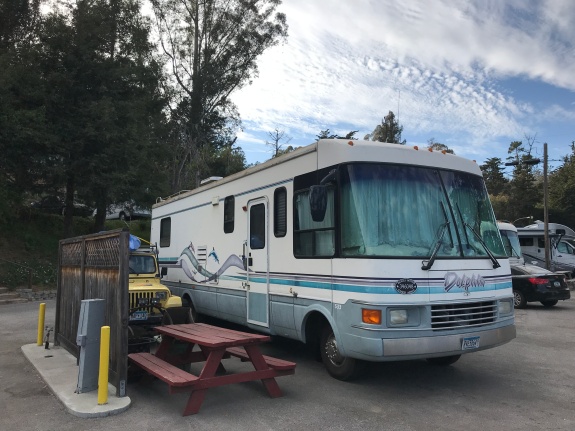 At this point, I didn’t care. I just wanted a safe and easy parking spot. When booking this place, we knew it would be everything we hated — a large parking lot with RVs packed in like sardines. But that was the sacrifice for finding a place to stay that was central to everything we wanted to do in the area. We just didn’t plan on having to deal with the uneven camping spots (at such a high price, no less).

We were finally parked and set about putting our house into livable shape. We were planning to stay here three nights to give us enough time to do everything we’d planned.

Oddly enough, I slept like a baby at this campground. Even though we had close neighbors and were on the intersection of two highways, I think the extra noise helped me sleep. After all, we were used to living alongside a road in Ramona. Plus, we had power, so I could run the fans at night.

Our first full day happened to be my birthday (yes, this was planned. Aquarium, remember?). We took most of the day to tour the Monterey Bay Aquarium. I had no expectations except that I thought it would be amazing (keeping those expectations low, right?).

I think we spent a total of six hours there, probably one of the longest aquarium trips of my life. I love that they mixed art and education with their exhibits. Very well done. They had interactive exhibits, and there were people everywhere, ready to answer questions and give more info on the animals. 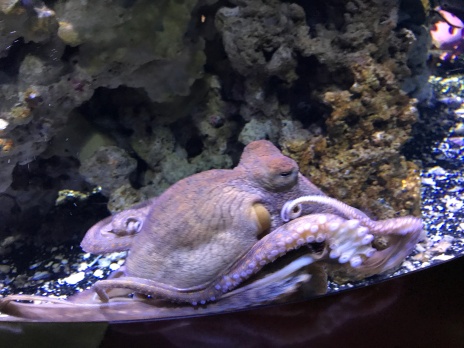 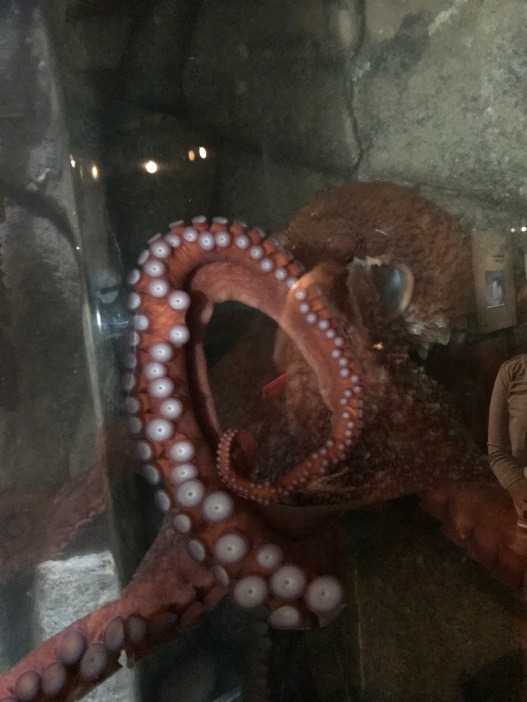 After the aquarium, we decided to have a quick lunch and head back home to grab the dogs before heading to Pinnacles National Park. It was a bit of a drive away, but we wanted to check it out. On our way into the park, we saw a snake warming itself on the pavement.

I politely encouraged it to move off the road since there were cars heading in both directions. I felt bad for moving it from its warm spot but figured it was better than being dead from a vehicle.

We kept driving in and saw a jackrabbit in the grass and a ton of turkey vultures.

And then we saw it. Warming itself on the pavement ahead was another snake. And this one looked like a rattler. I was so excited. We had lived in SoCal for two years, and the entire time, I wanted to see a rattlesnake (without the dogs being in jeopardy, of course).

We pulled over on the side of the road, and I jumped out to take a closer look. Thankfully, I’d brought my long camera lens and was able to take a few photos.

We also encouraged it to move off the road so it wouldn’t get hit by a car. Andy was disappointed that it didn’t rattle at us. But I was ecstatic that I had finally seen one! And in relatively safe conditions. 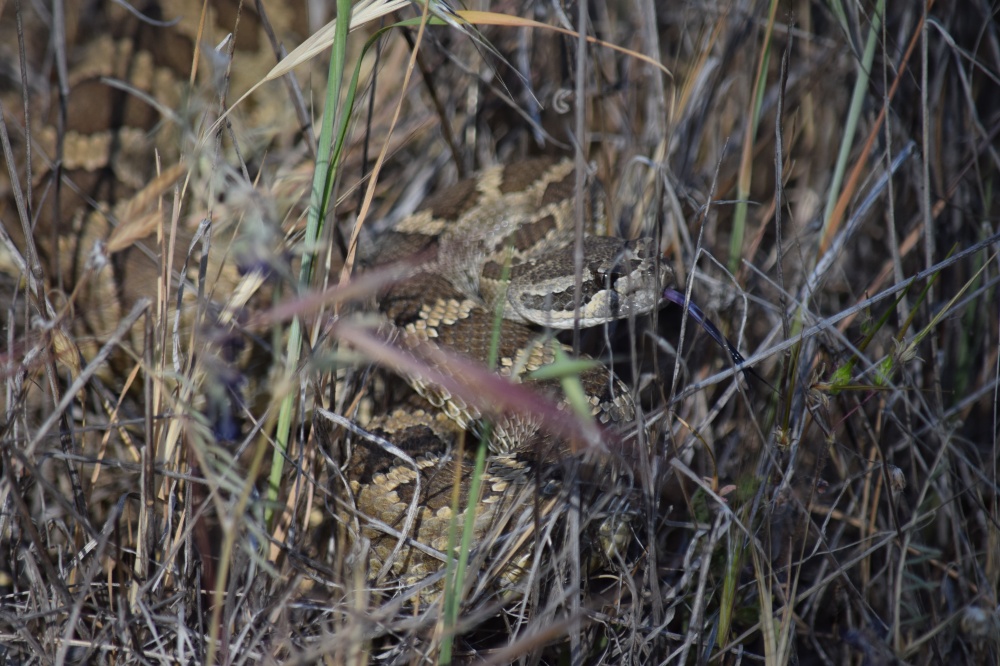 Riding that high, we continued on our way to see the pinnacles. It was nearing sunset, so we didn’t stay long. But it was a pretty view anyway. We found out that we’d gone into the smaller entrance and were only able to see a small portion of the park. Darn. But the rattlesnake encounter made the entire drive worth it. 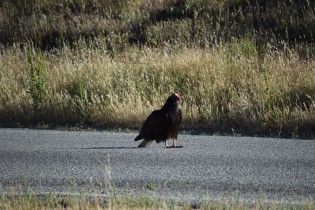 The next day was a long driving day. We packed a lunch and the dogs and drove to Big Sur in the Jeep. At San Simeon, we’d driven the entire southern end up to the point where the road closed. We decided to do the same thing from the north.

Along the way, we stopped at a beach with a warning about not entering the water. The sign said that at least 30 people had died at the beach. Scary. We could see why it was dangerous, the way the waves came in.

They were beautiful but deadly.

Since the beach allowed dogs, we all stretched our legs for a bit, watching the waves in the process.

Then we headed back on the road. There were many turnouts and vista points, places to take in the views. We stopped at several along the way.

It was beautiful. The rocky cliff that dropped off into the tumultuous ocean below. The rolling hills. The flowers. The grassy fields. The towering trees, some of them redwoods. The rivers and streams. 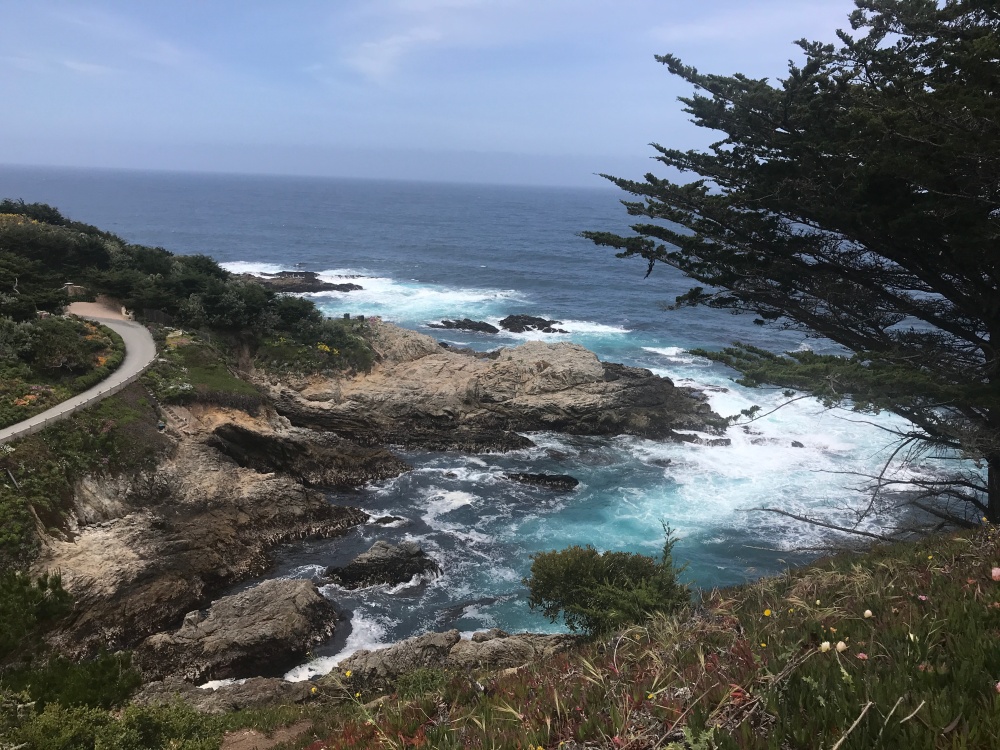 We went through changing landscapes that varied from fields to desert to woodland.

We weren’t sure if we were going to turn around once we reached Big Sur or go all the way to the end, where the road closed. It was a lot of driving, but we decided to see the entire thing.

We had a picnic on our way back, letting the dogs get in a little exercise.

Eventually, we’d made our way back home. Though it was a lot of driving in those couple of days, we knew ahead of time that it would be that way since there was so much we wanted to see. Unfortunately, we were unable to hook up with our friends Fabien and Marie who live not too far away. The timing just wasn’t right for any of us — but we’ll hopefully visit in the future!

We were also unable to make it to the Oakland Zoo to visit their new wolf exhibit, which includes a wolf from the California Wolf Center. The exhibit opens in June, but we were planning to take a sneak peek at it. Unfortunately, it didn’t work out with the rest of our plans.

After three nights, we loaded up and set out on the road again. This time, heading north through the Bay area.

We opted not to cross the Golden Gate Bridge. After reading some online RV forums and checking into the restrictions on the transit website, we found out that not only would it cost us $31 to cross, but the roads were like driving through city streets instead of highways (even though it’s Highway 101 that crosses it).

We checked out different routes and decided to cross the Richmond/San Raphael bridge instead. Cheaper and the roads were highways.

I even drove for a minute (if you haven’t caught on by now, I never drive the RV. But we have a deal: Andy drives the RV and I drive us everywhere in the Jeep). 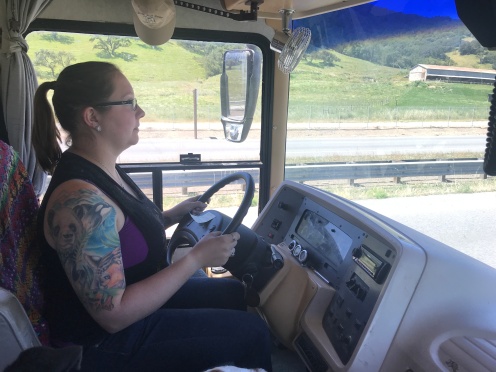 We saw a car on fire on our drive and could feel the extreme heat inside our RV as we drove by.

Our next stop was Fort Bragg.

The drive to Fort Bragg was smooth — and beautiful. I think we loved the entirety of Mendocino County. 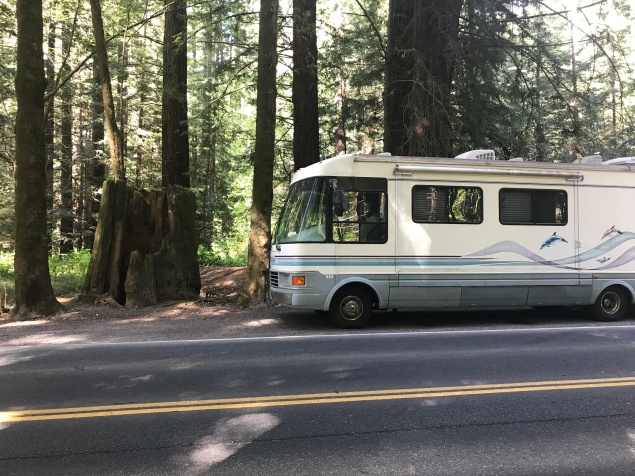 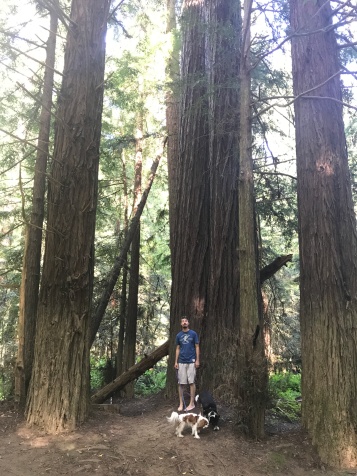 But it took us much longer than expected because the roads were very narrow and curvy, so it was slow going. It was definitely worth it. Our mouths hung open as we took in the towering trees and greenery. 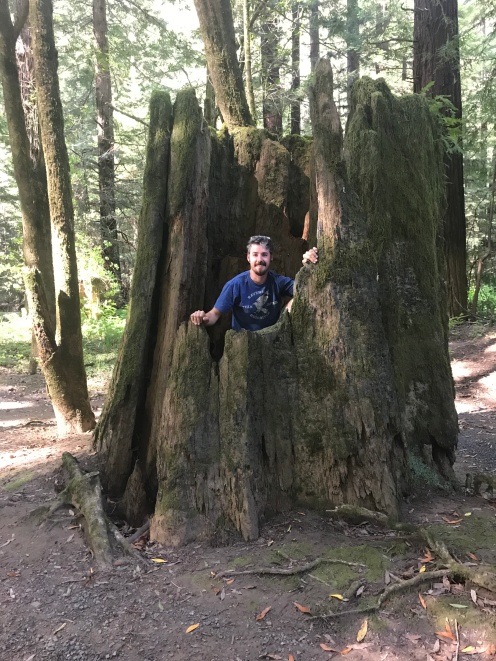 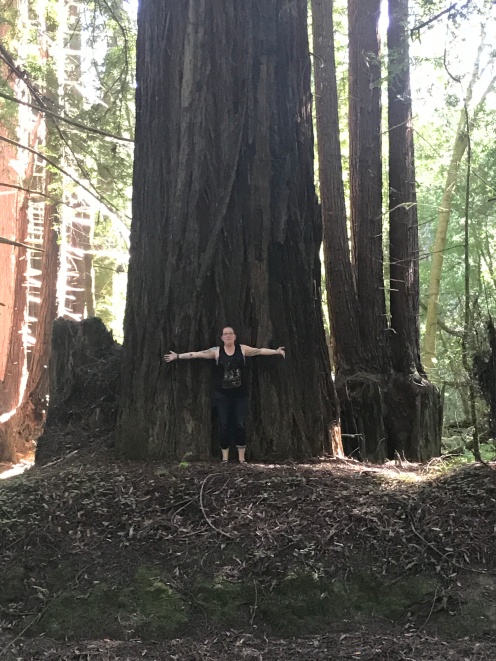 We made it safely to our campsite at Pomo Campground. It was a nice place, and our spot was very secluded — you could hardly tell where we were from the road through the campground. The area was quiet, as well, and we could hear waves in the distance.

We didn’t unpack much since we planned to only spend one night here. When we first saw the site, campground, and area, we were bummed that we had only planned one night. But after checking out the town and reading the campground restrictions, we were happy with our decision to make this a stopping point. There wasn’t a great vibe to the town, and the campground was very…ageist. I think if they could have afforded to make themselves a 55-plus campground, they would’ve done it. Their long list of rules was not very friendly. We certainly got some stares as we checked in — it’s like they hadn’t seen younger RVers before!

Anyway, after parking and getting the animals situated, we set off to explore Glass Beach. Apparently, from 1906 to 1967, residents dumped their trash into the ocean.

After that period ended, the beach was cleaned up, but the ocean washed ashore wave-tumbled multi-colored glass, thus the name “Glass Beach.”

As sad as the history is, the beach was beautiful. Much of the main beach has little glass left, but Andy and I did a little rock climbing and found ourselves in a secluded cove which had sand that was at least 50 percent glass. 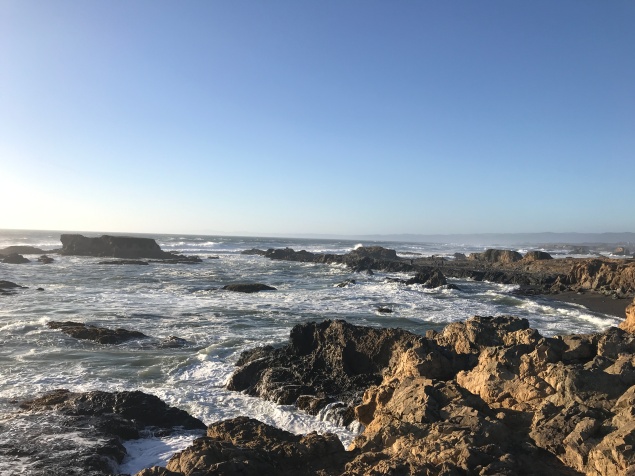 We watched the angry ocean waves for a long time, as well as the seals that were playing nearby. 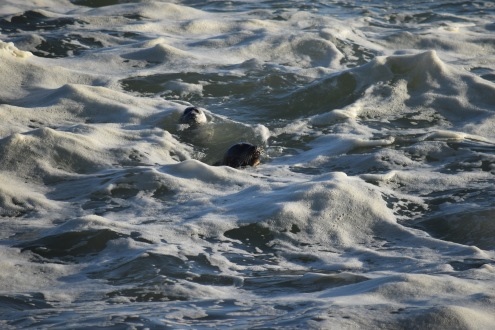 It was a beautiful and relaxing way to spend the evening. Afterwards, we headed back to the RV to get some rest for our long drive the next day. We were getting ready to head to the Redwoods for Andy’s birthday!