Overall, it was a pretty low-key week for the Wandering Dolphin crew.

I hosted my first open mic poetry night at The Art Center in town.

We had 20 audience members and 7 readers. It was a fun night and was certainly a new thing for me that brought me out of my comfort zone. I actually read two poems out loud!

Saturday night, the park hosted a movie night in the park. They played The Secret Life of Pets on a huge, inflatable screen. What a cute movie.

Of course, we spent some much-needed snuggle time with the pets. 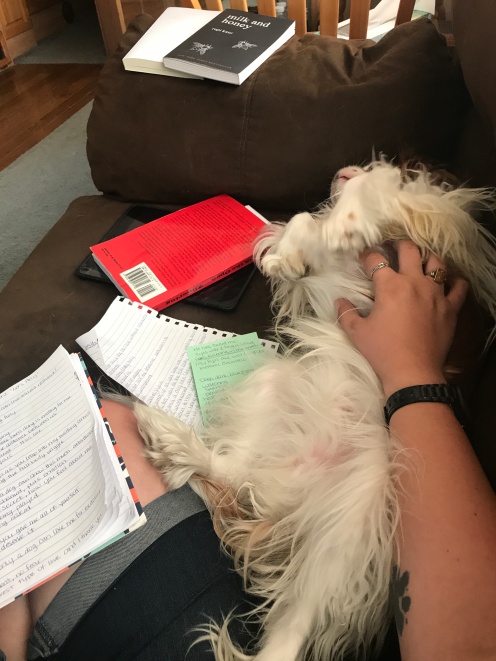 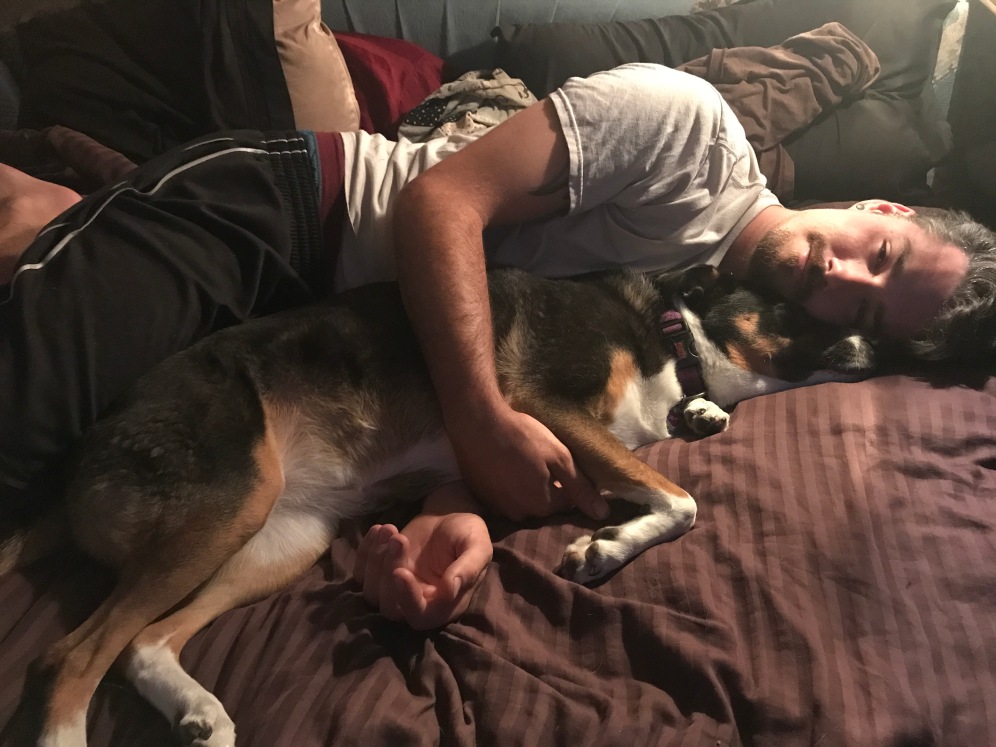 We took the dogs on a hike to the grasslands and spent about an hour grooming Teddy afterwards.

We found out that the cattery we built is the perfect jungle gym for mice.

And that Miss Eleanor is still a great hunter (she caught and killed this one in the RV). 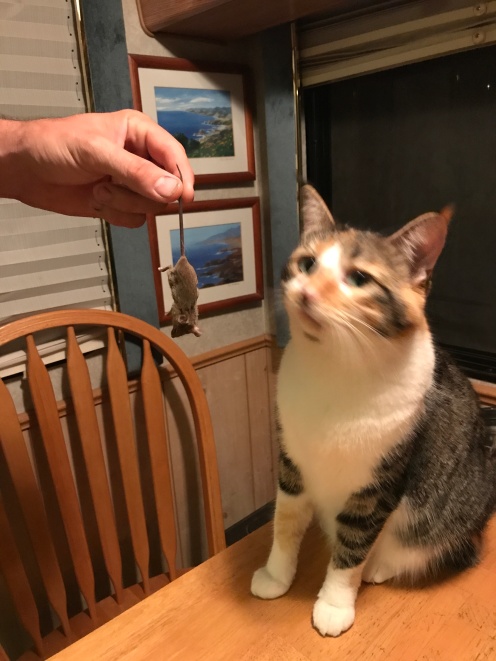 It looks like we will be taking down the cattery — both the mice and ants use it for a way in.

We watched the eclipse on Monday morning using a welding helmet. It was a pretty cool sight to see.

Monday was probably our most adventurous day. This time of year, the leopard sharks come to a certain area of La Jolla in very large numbers. The water is warm and is a perfect incubator for the pregnant sharks. After doing some research, we decided to head down to the beach for a snorkel adventure to see if we could spot some sharks.

We entered the water slowly, having not gone snorkeling since our Hawaii trip (too long ago, if you ask me).

The water was warm, the waves calm and the bottom was nice and sandy. The water looked so blue that it almost reminded us of Hawaii or the Caribbean.

We stayed in this area for over an hour, scouring the sandy flats and rocky crevices.

We saw several small fish but no signs of sharks, rays or guitarfish.

After a while, we decided to head over to the cove to see what we could find. I figured there wouldn’t be sharks there but the snorkeling is still normally cool. It must have been fate for us to have a snorkeling day because we found parking easily at both locations! That almost never happens down there. 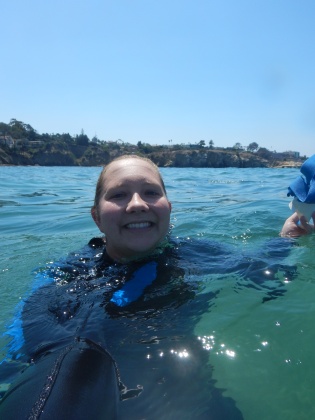 I was a little nervous about snorkeling in the cove because the last (and only) time we went there, we were almost attacked by sea lions. I entered the water cautiously, making sure to keep my distance from the edges.

The water was much clearer here than the other place and we could see a lot of fish. 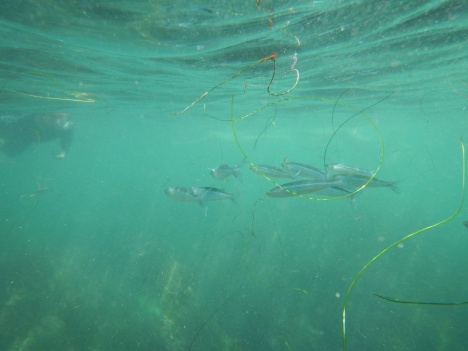 There were a few rowdy sea lions that came closer to us. Luckily, nothing like last time. I tried to take some underwater photos of them but they were too quick.

The video below reminds me of a freshwater planted aquarium with giant danios. PetSmart peeps, anyone else see that??

After doing a lap around the Cove, we decided to head out. On our way back to the car, we noticed people snorkeling in another location but we didn’t know where they entered the water. We hiked down a slippery dirt slope and found the secret spot. There were very few people here but there was, unfortunately, an injured sea lion.

SeaWorld’s rescue team was on site. One of the men said that it looked like a shark attacked this little guy. After a little bit of a struggle, they finally netted the sea lion so they could take him in for rehabilitation.

After they took him away, we found a rocky crevice to enter the water. The snorkeling in this area was pretty neat but the visibility was not as great because the water got deep quickly. However, we had access to some caves, and cave snorkeling is AMAZING. 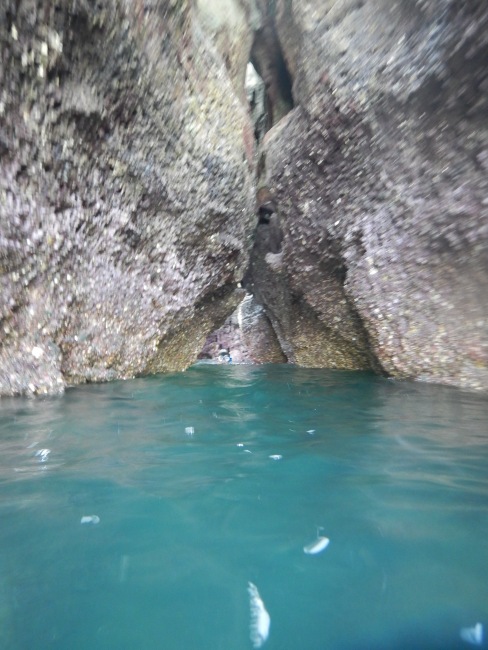 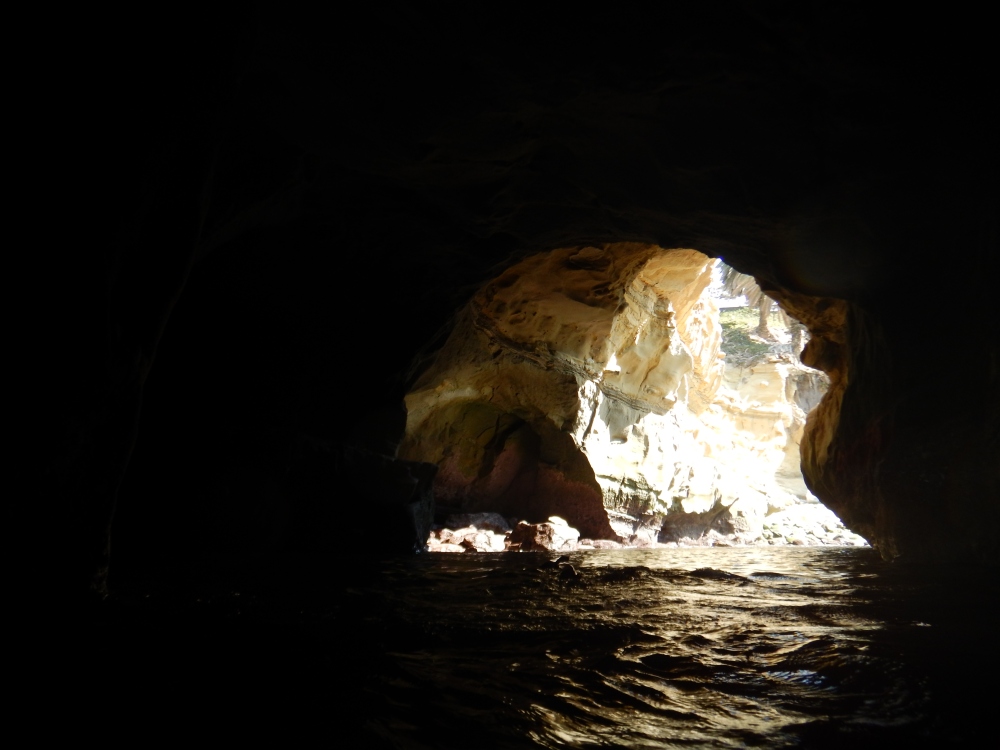 I was hoping to see some octopuses or something really neat but the experience of snorkeling in a cave was awesome in itself.

We even saw more sea lions. 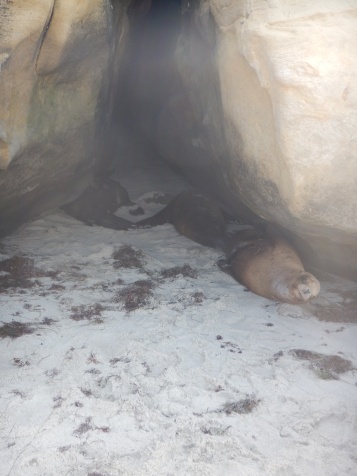 Thankfully, they were lazy and didn’t really care about us. Not even the two that were wrestling nearby.

I tried so hard to get pictures of these colorful fish (juvenile Garibaldi) but they all turned out blurry. So, here’s a blurry video instead.

It was a beautiful day for a snorkel adventure and I was happy to get back in the water again!

We may not have seen any sharks but we have almost a full month left of peak season! I’m holding out hope that it will happen on our next adventure.

After all that water time, we were exhausted. So, we piled the two of us plus both dogs into the hammock and talked about how great it is that there are almost no mosquitoes in California!