The past few days have been filled with sun and water.  Our adventures brought us in to San Diego, exploring different areas of the city we have never seen before.  We spent a morning kayaking around La Jolla, getting up close to some amazing wildlife.  It was awesome to see stuff from the water. 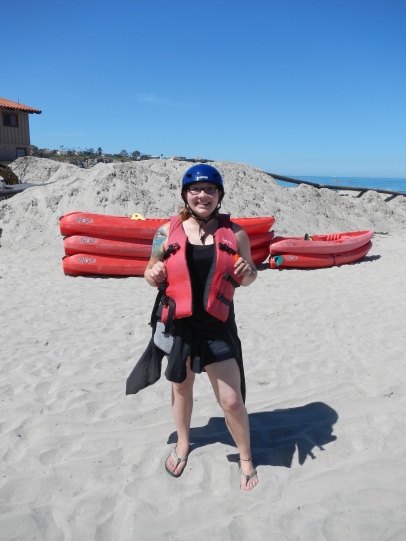 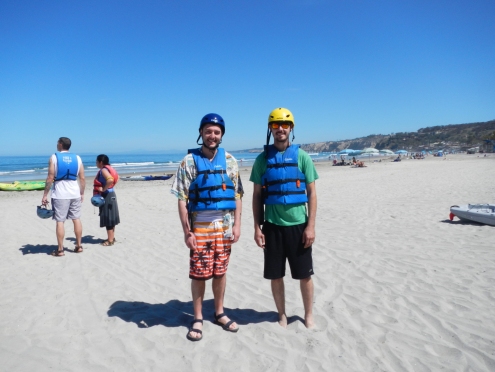 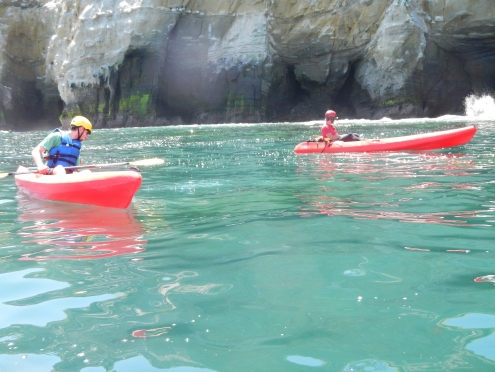 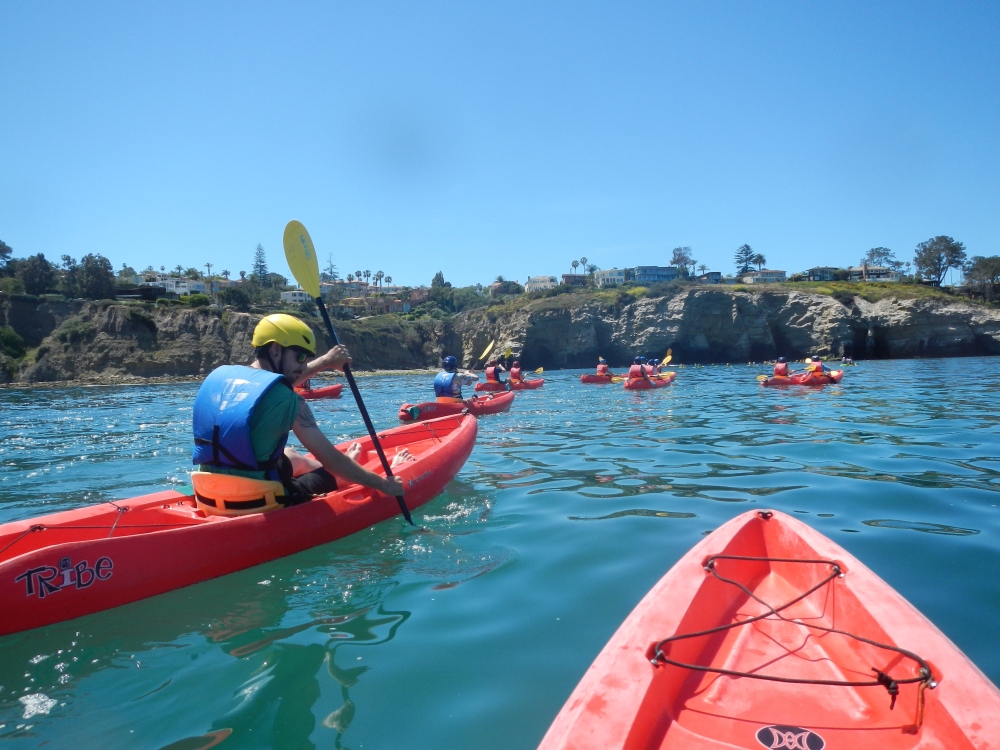 We learned a lot about the animals of the area but also about the land.  This area is one of the fastest eroding sections of land in Southern California and many of the home owners are being forced to deconstruct their homes so they don’t fall into the ocean, like actually fall into the ocean.  Not only that but the area lies on a fault so it’s even more dangerous.

After kayaking, we spent the afternoon downtown, wandering the streets in search of something interesting.  A woman stopped me and asked if I was from San Diego because she said I had a “San Diego tattoo.” I wasn’t quite sure what that meant but she said it as a compliment! 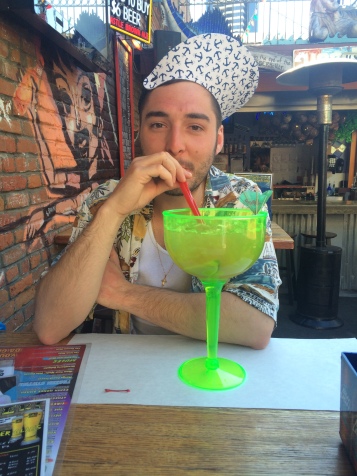 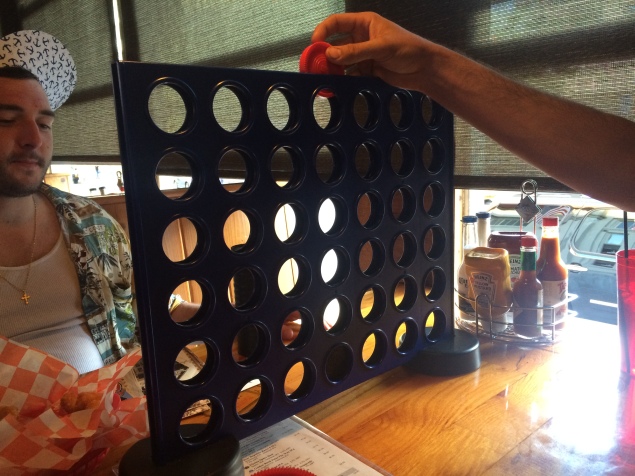 We had dinner and drinks in the city and played a giant game of Connect Four.

The next day, our friend Trav and I explored even further.  We went to Coronado Island and drove around, saw the hotel, and stopped for a delicious smoothie.  The weather has been hot and the sun relentless.

We headed over to Point Loma where we visited the Cabrillo National Monument.  Our admission was free due to National Parks week (score!) and we were able to visit the monument and tide pools. 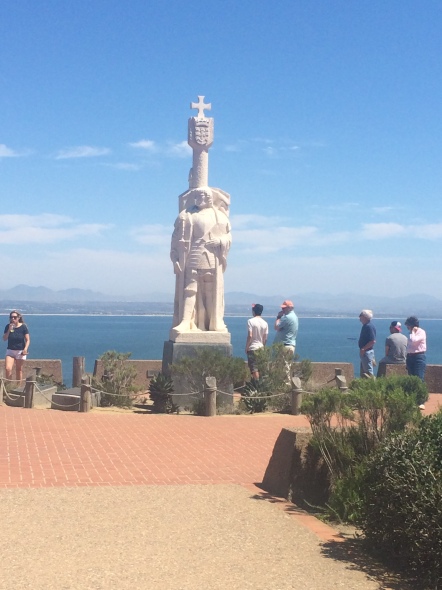 The tide pools were fun.  After nearly dropping my phone into the water crossing a deeper pool, I was able to snap a pretty neat photo of the area. 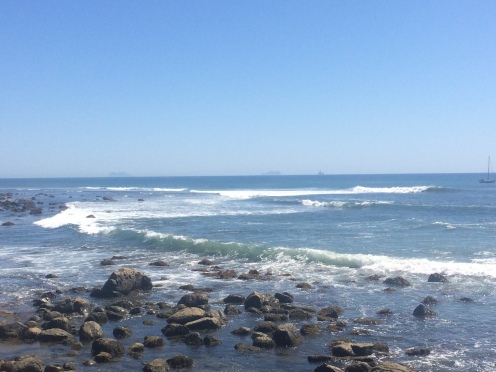 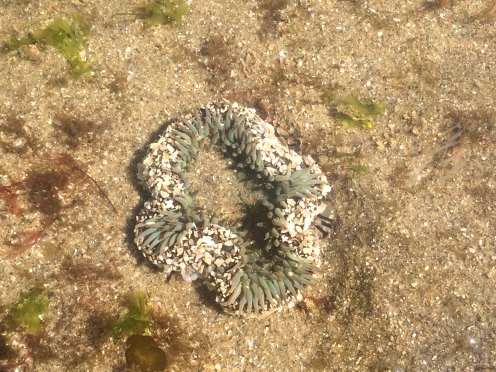 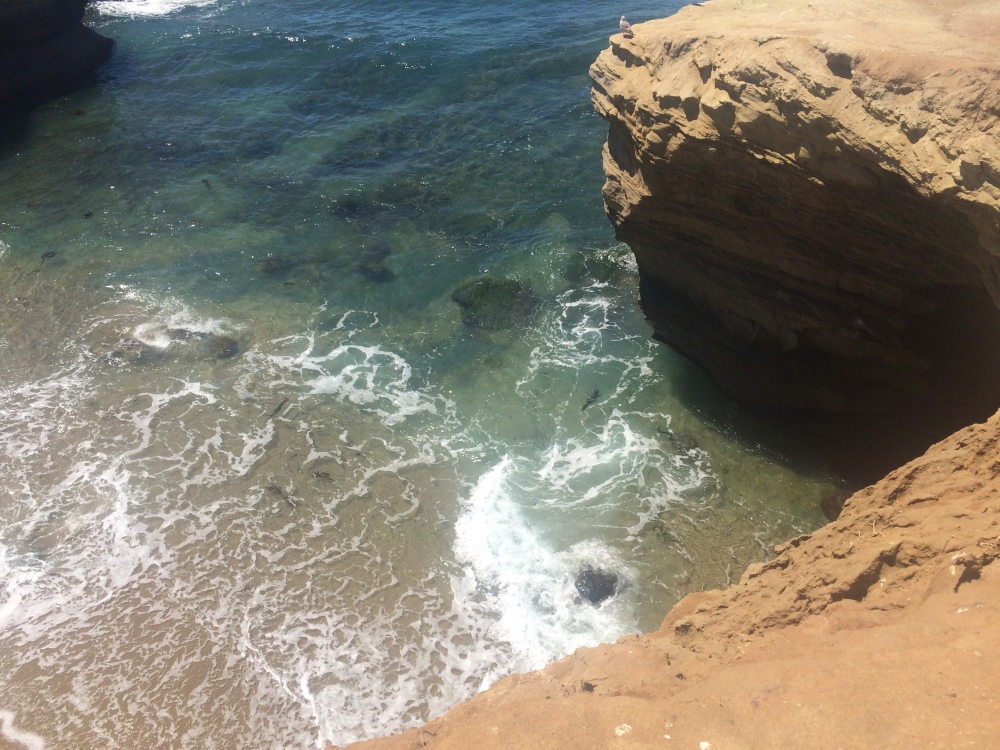 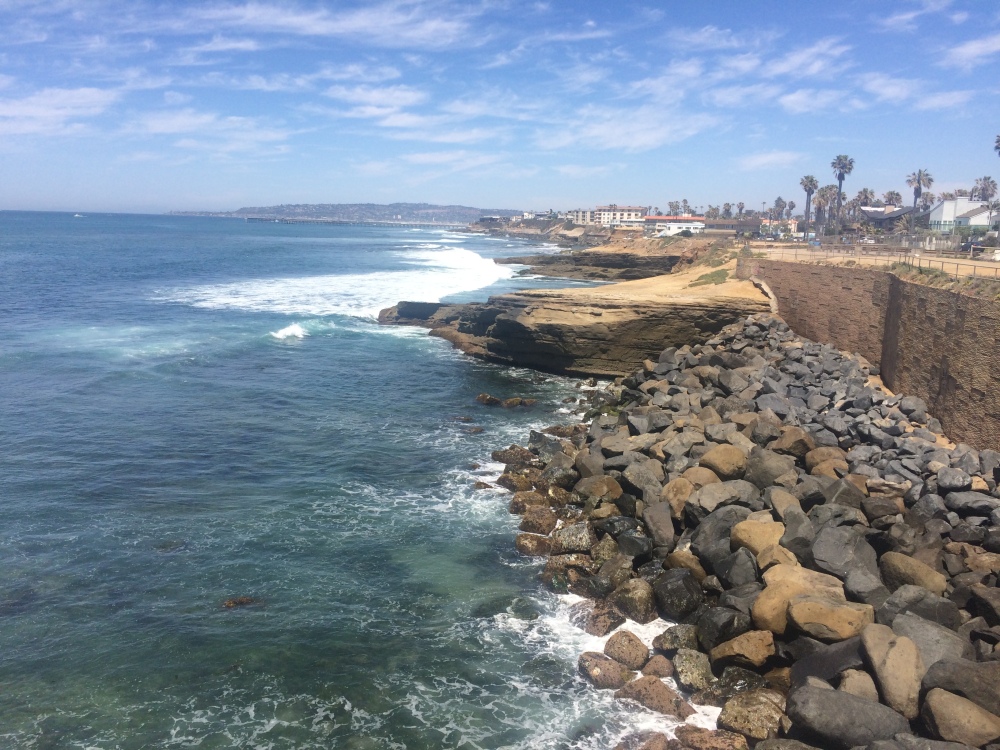 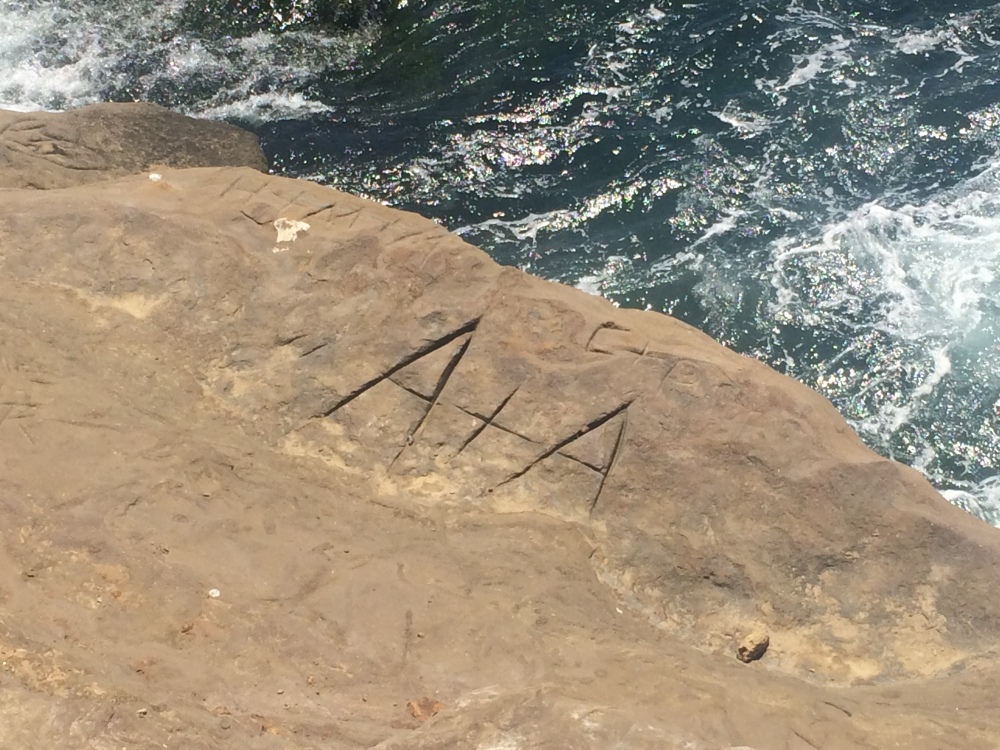 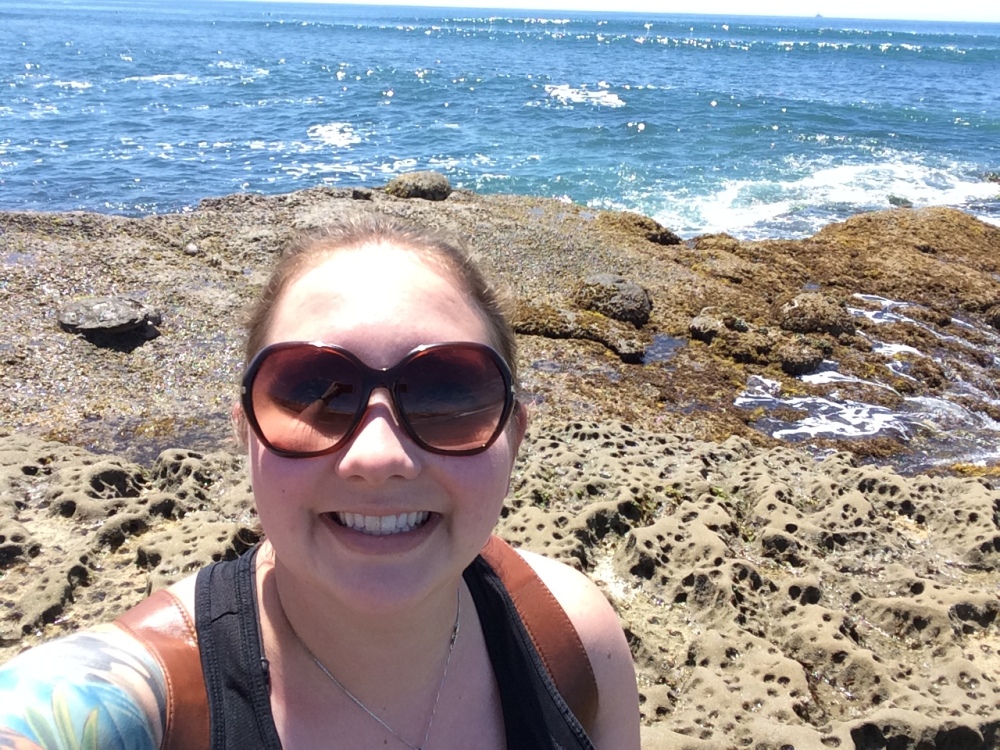 I had to take a video of the waves:

We decided to spend the next day at the beach so we took Trav down to Oceanside to see the harbor and pier.  We bought boogie boards and spent some much needed time in the water.  It was cold but amazing!  Once we were tired and starving, we had lunch on the pier and headed back home. 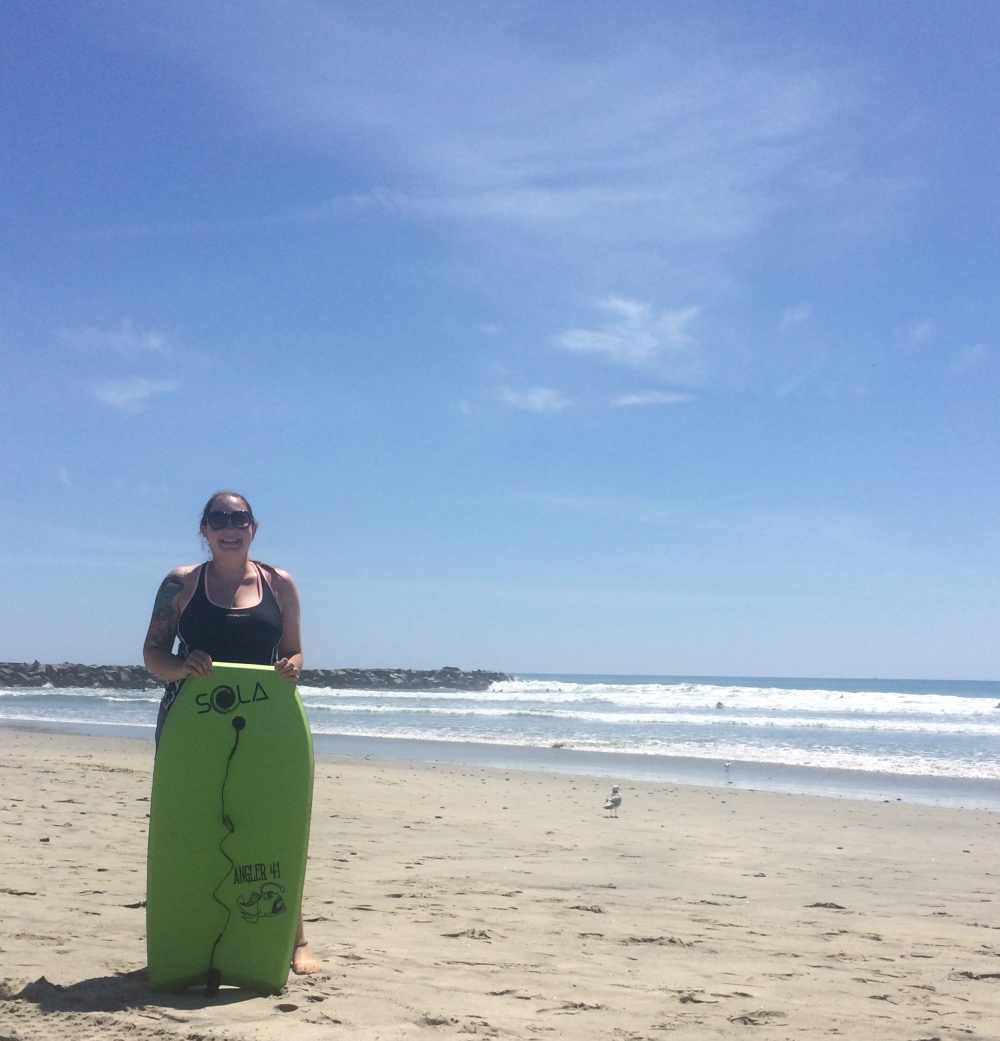 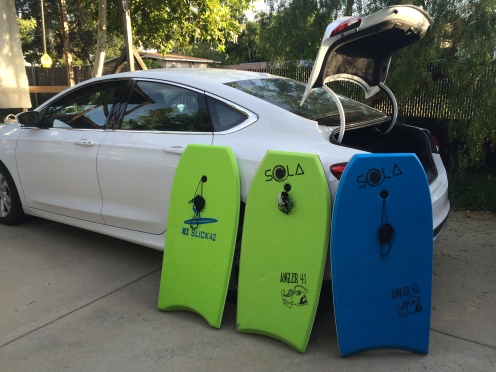 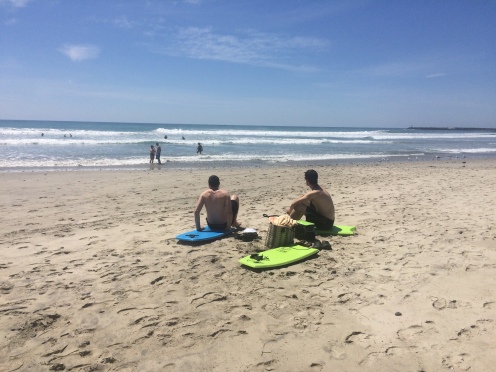 Today was another adventurous day.  We decided to go snorkeling in La Jolla Ecological Reserve.  I haven’t been snorkeling in almost two years and that is far too long!  It is one of my absolute favorite activities and has been absent from my life for an unreasonable amount of time.  We looked up some snorkeling sites online, chose one, and headed out.  And it was amazing. 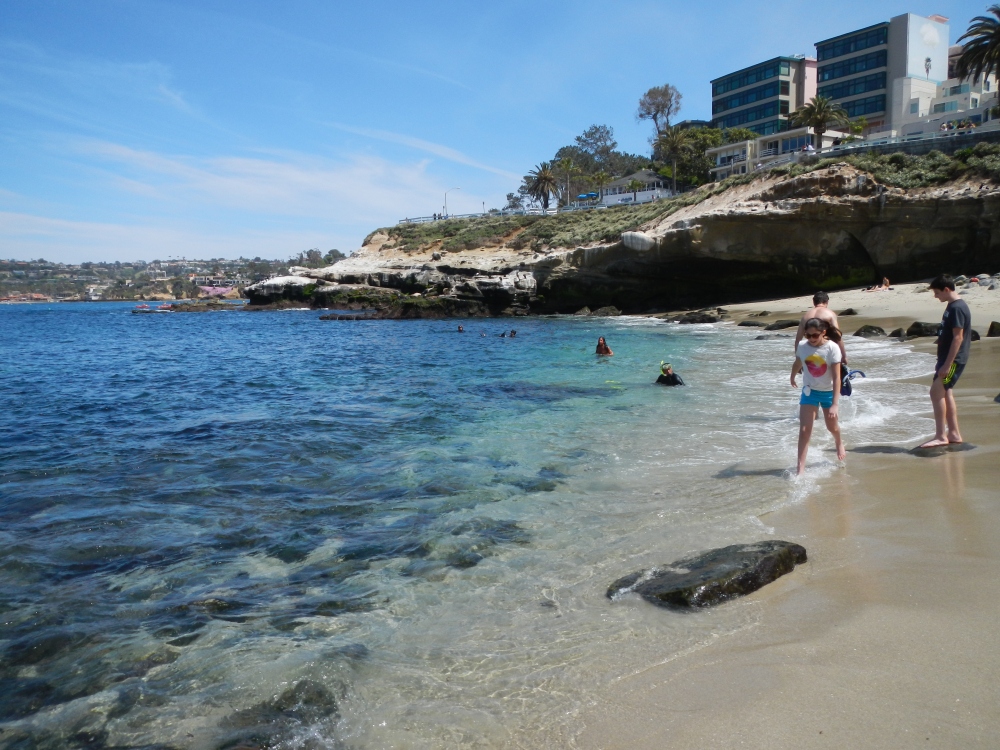 Sea lions have taken over the cove but that didn’t stop us from getting in and exploring (though maybe it should have).  The beach was crowded but the water was not, with only a handful of other snorkelers in the cove. 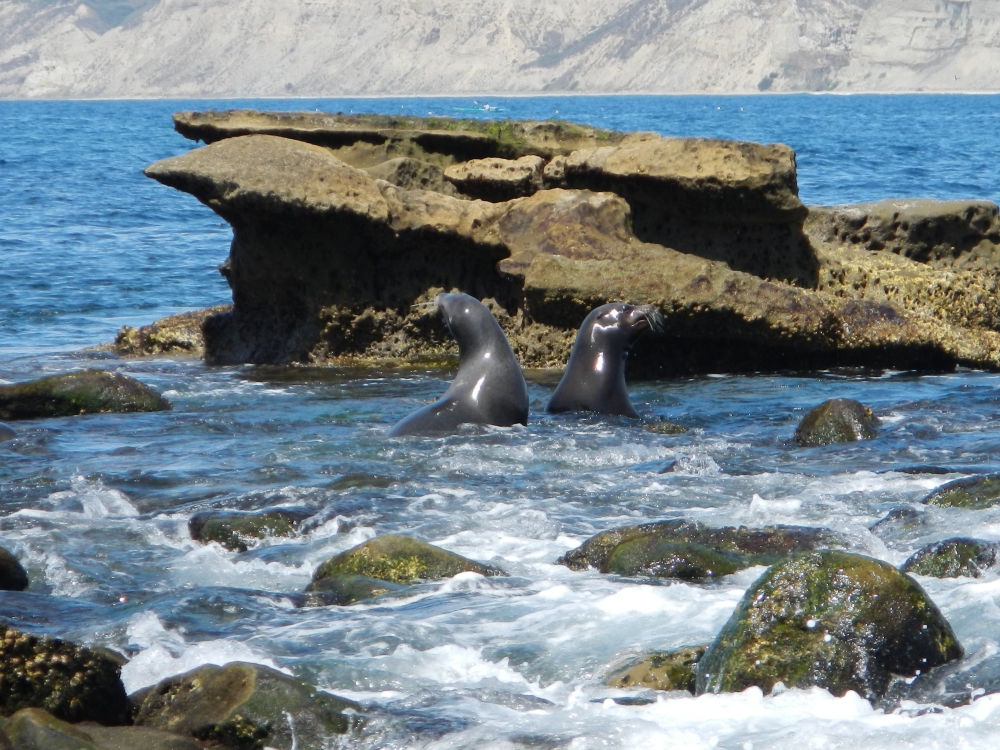 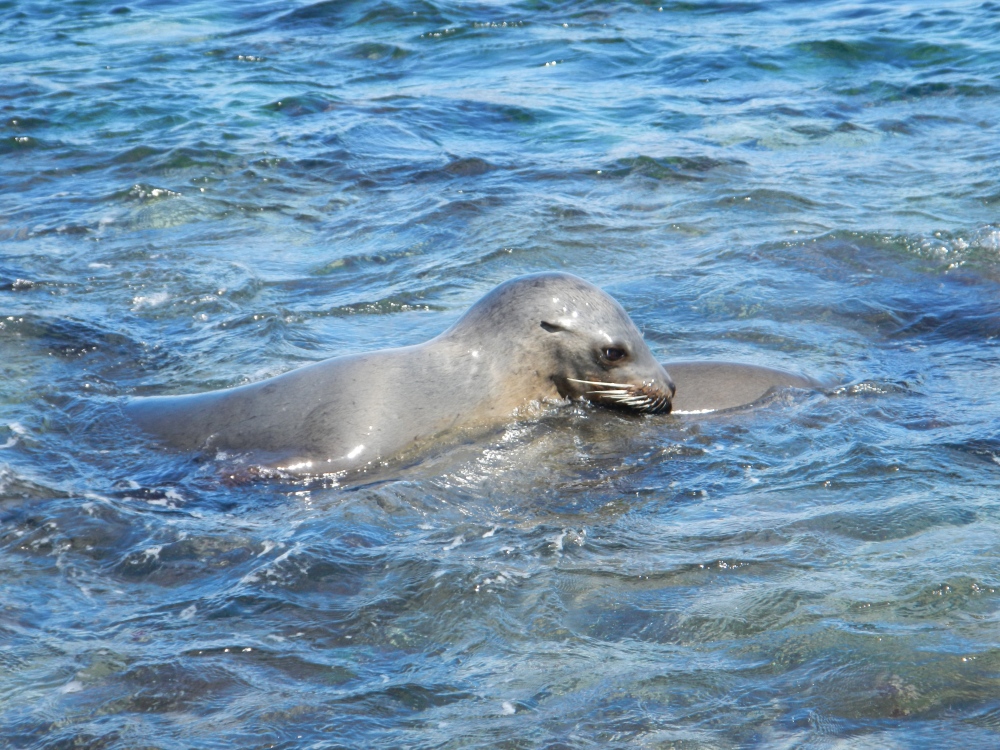 I even got a video of the sea lions wrestling in the waves:

The snorkeling here was different from other places I have been before.  We have gone quite a bit in the Caribbean and in Hawaii but this was totally new.  The tall sea grasses were really interesting, as were the variety of fish (very different from what I’m used to).  We saw a very large crab that I was not quick enough to photograph but I did get some good footage on the Garibaldi (California’s state fish). 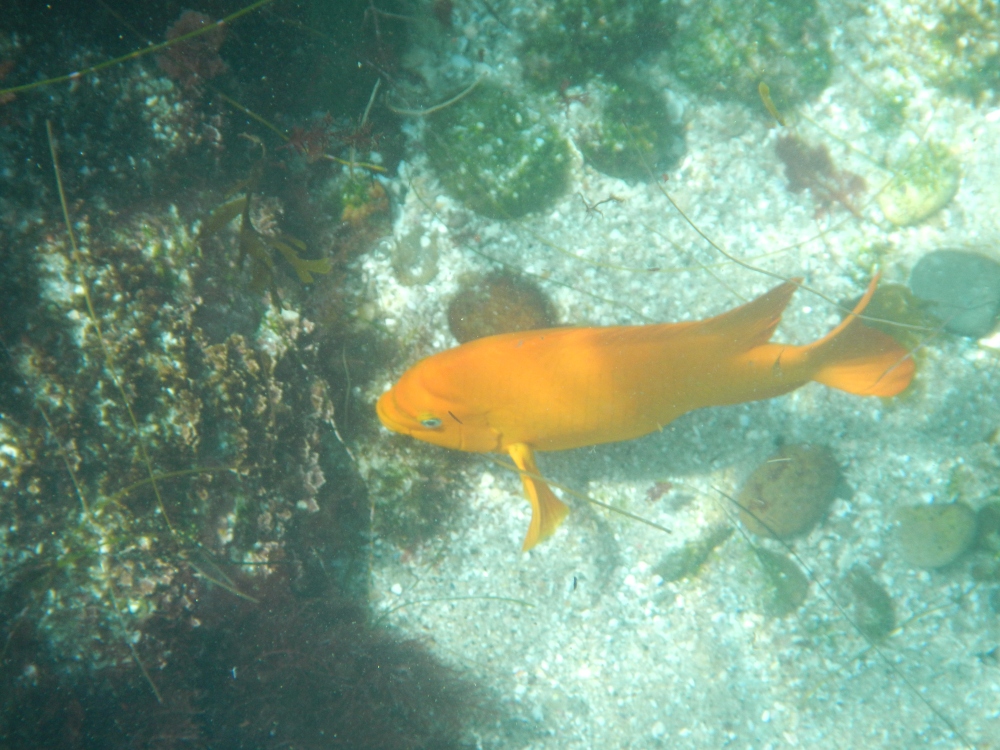 And a shaky video:

Things were going great.  I saw a sea lion swim past me, probably one of the coolest encounters aside from swimming with sea turtles in Hawaii.  Then it started to go south.  We think that the beach started to get busier and more people began entering the water.  Whatever it was, a sea lion decided that we were a threat.  Trav had one shoot up right next to his face while clearing out his mask and I had one begin circling around me.  Then it started to shoot itself at me with its mouth open wide, showing its teeth.  I eventually made it out of the water, quickly swimming away from the sea lion as it continuously circled me and swam at me threateningly.  I wasn’t sure at first if it was out of aggression but it soon became clear that I was an unwanted presence.  I found out later that the area we were going in has had a few attacks.  Though sea lion attacks on humans are rare, they have been more frequent and we were visiting during breeding season when tensions were high and territories were not to be breached. 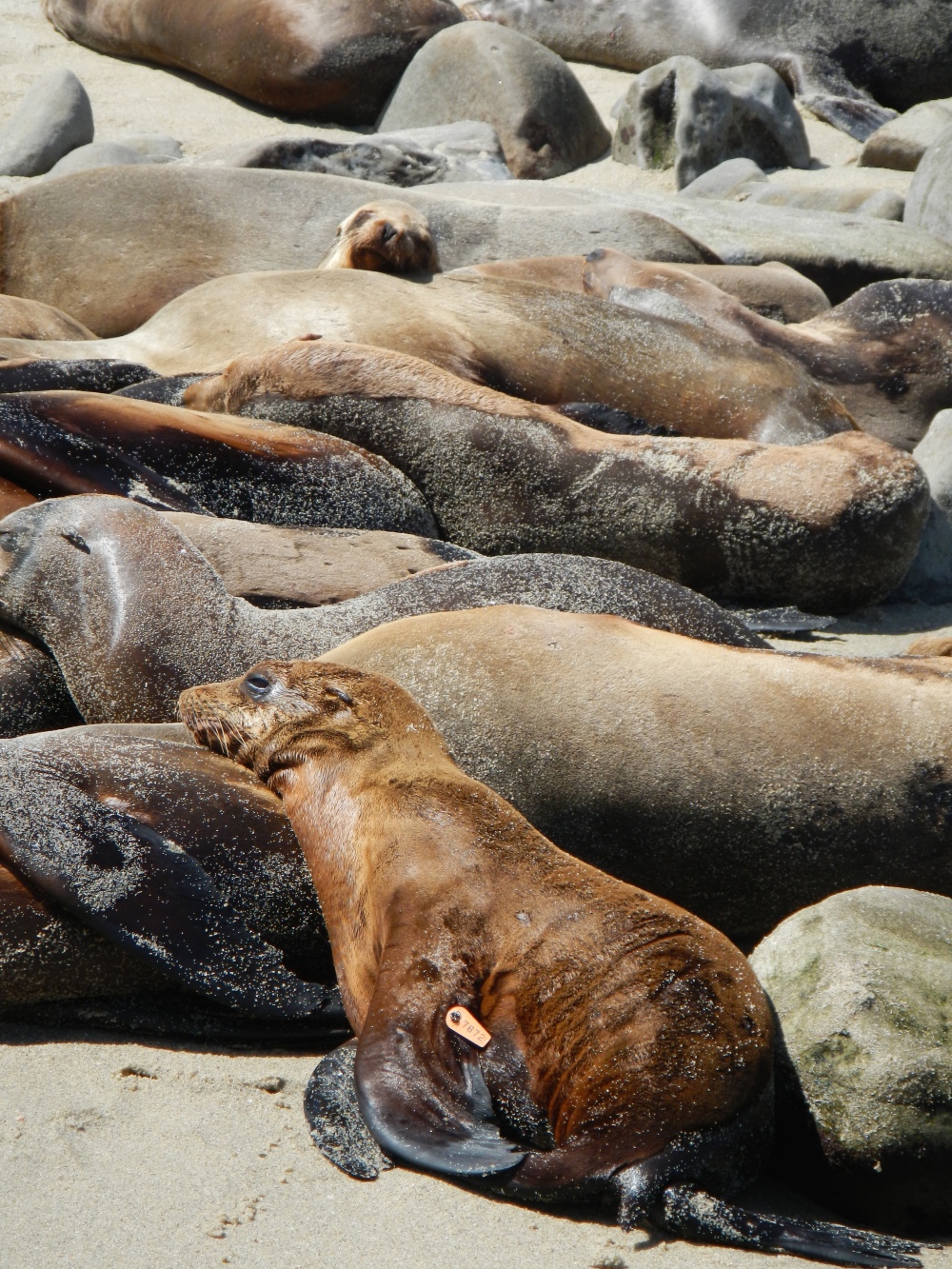 After exiting the water and watching the sea lion guard the cove, back and forth, we decided to head out and find another place to swim.  We didn’t want to add to its discomfort with the other snorkelers in its space and we really didn’t want to get bit.

We drove up the coast and found a secluded beach to go boogie boarding at. 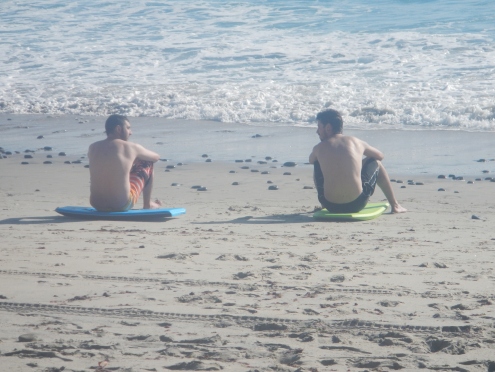 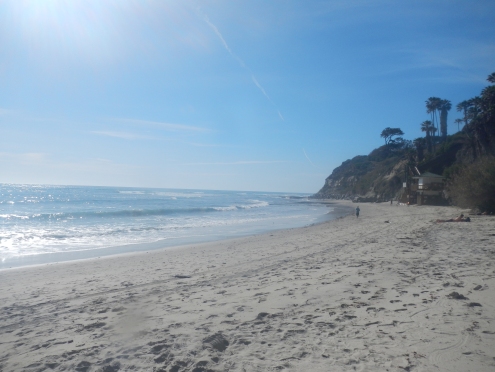 With the hot sun finally cooling down, we headed in to Oceanside for their Sunset Market to find some food and listen to live music.  We watched the sunset over the ocean, another sun disappearing over the horizon after another amazing day.  We are so lucky to be here right now. 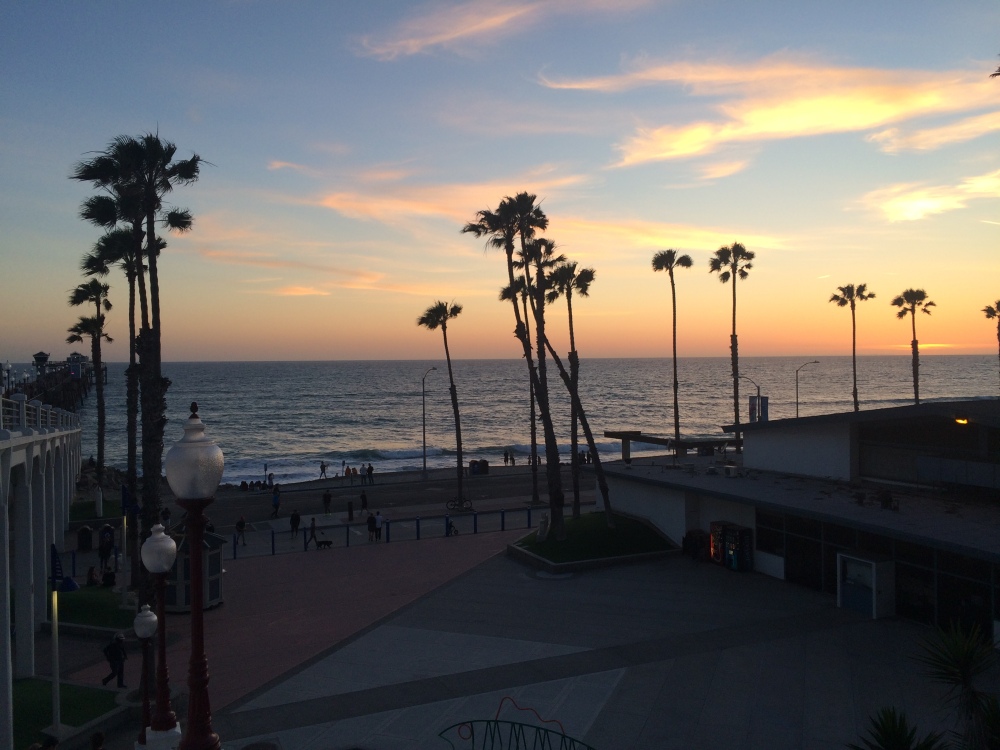