Wow, it has been much longer than I had anticipated before I’d have time to write about this part, the big part. But you know how life goes…before you know it, weeks have gone by and one of the most monumental experiences of your year (or your life?) is already in the past.

Perhaps it’s an understatement to say I was ecstatic to arrive at Yellowstone.

I was positively bouncing in the front seat at the gate as the kind woman took our receipts from the other parks and applied them to an annual park pass (we hadn’t bought one because we didn’t think we’d be visiting enough places to make it worth the cost, but the addition of Little Bighorn changed that).

We drove away from there with an annual pass clutched in my excited hands, my signature drying on the back. And at the first sign stating we were officially in Yellowstone, I flung the van door open and ran up to it, nearly crying with joy (my dad would later tell me during a discussion about our favorite parts of the trip that this was one of his favorite moments). 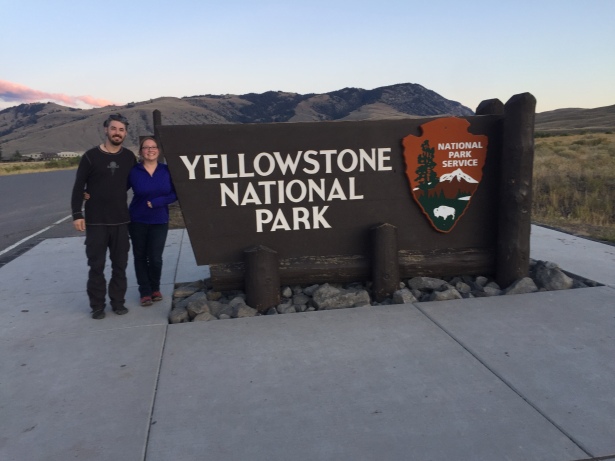 We headed to our cabin at Mammoth Hot Springs and unloaded before searching out a place to have dinner, ending up in Gardiner. 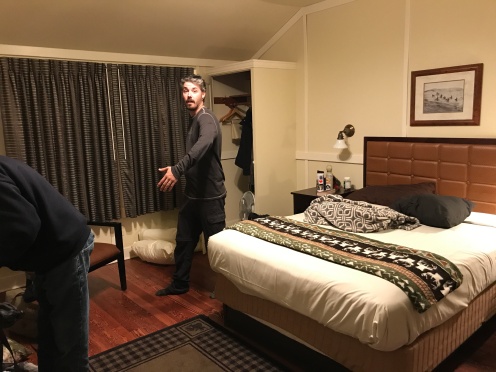 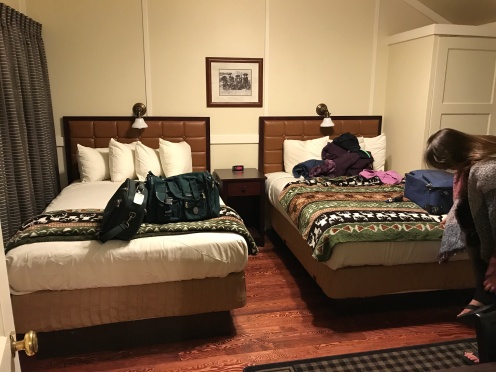 The next morning was our earliest day yet. I was determined to see wolves, and nothing anybody could tell me would deter me from making this happen. Awake at 4:30, we started prepping for a day of scouting for wildlife.

And boy, were we ever rewarded.

I had done some research and planned a route in advance, so I knew where I wanted to go. As we listened to elk bugling in the wee morning hours, we loaded into our van and set off in the dark. We knew we were passing beautiful landscape before the sun rose, but we had a destination.

As we entered the area, I looked to the right and saw a dark spot on a hill. “Black bear!” I cried out, as we pulled over into the closest turnout.

There it was, climbing a hill in the distance. This was my first black bear sighting (when I say this, I am obviously referring to sightings in the wild).

We watched it for a while before continuing on our way. I was nervous, anxious. I wanted to see wolves so badly. We rounded a corner and saw a small group of people on a ridge with spotting scopes. I told them we had to pull over, something told me this was it.

“There are wolves out there,” I said.

We climbed the hill with our binoculars and an older spotting scope. After talking to the small handful of people who had also deemed it necessary to be out in the early morning hours, we determined there was a pack of 11 wolves and three grizzly bears in the distance.

As we sighted them in, we watched the lumbering walk of one of the bears as it crossed the field. And to our astonishment, we watched the wolves frolic and play while one of them went up to harass the bear, nipping at its back legs.

My mouth dropped open. I couldn’t believe it. I could feel every fiber of my being wired with excitement, gratitude, and some feeling I couldn’t define.

After watching them for a while, I looked up at Andy with tears in my eyes. “I know, baby,” he said. And that’s all he needed to say. He knew how much this moment meant to me.

The wind was cold on the small ridge, and we had not dressed appropriately. I could hardly feel the cold as we were watching them. Though there were 11 total, the most I saw at one time was five. Most of them were dark and black, though I did spot a gray one.

Some folks had really nice spotting scopes that they let us use to get an even better look at the animals — almost crystal clear considering they were probably 800-1000 yards away from us. (I immediately started trying to convince Andy that we should invest in a scope such as these, but he’s being a bit stubborn about spending $3,000-5,000 on a single scope in addition to the larger camera lens I want. I can’t imagine why…)

Eventually, it was time to move on to other things, though it was hard getting me to leave. We spent the day exploring other parts of Yellowstone, seeing the sights and taking short hikes along a few different trails. It was an extraordinary first day. And there was more to come. 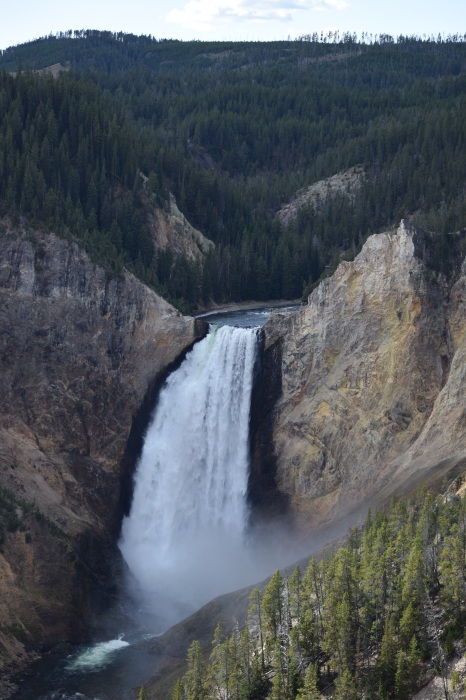 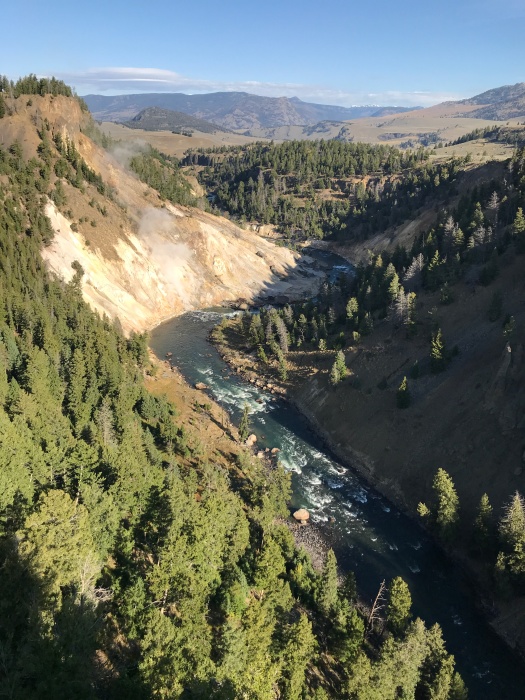 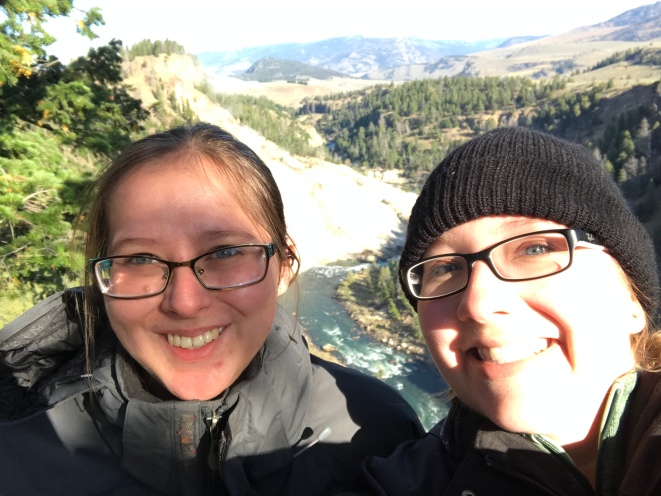 We decided to spend the second day exploring the Grand Tetons and southern part of the park. I woke up and went outside to see a bull elk bugling on the ridge near our cabin. It was going to be a beautiful day. 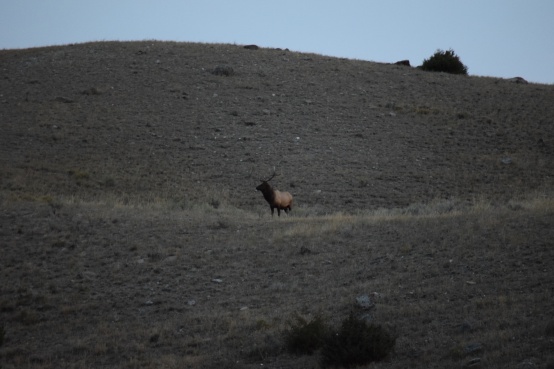 We went to see Old Faithful — the lodge and the geyser. 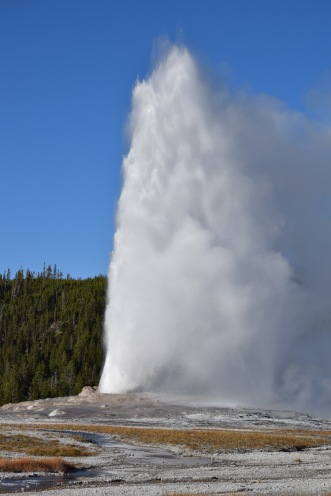 The Grand Tetons were simply beautiful, there is no other way to describe them. We had a picnic, soaking in the sun and the sight of the mountains in the distance. 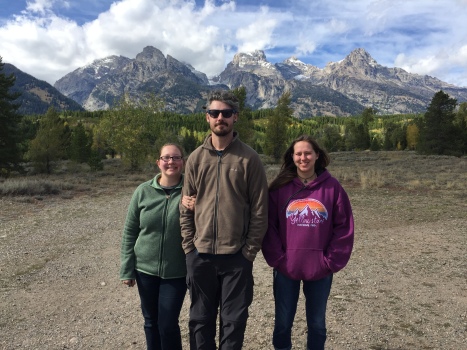 But things were starting to go wrong. Our van had started having some problems earlier in the trip, even though it had been serviced before we left. Aside from the blinker acting up, we’d heard some crazy noises from the front driver’s side tire and eventually realized the tire’s lug nuts hadn’t been tightened fully when we brought it to Tires Plus. They were loose to the touch, causing the terrifying realization that we all could have died driving through the mountains when our tire fell off.

Then, the van started making some other noises. It didn’t seem to like our elevation, or something else, and it started misfiring. The check-engine light came on. And then even more noises began…