Sharing this has been a long time coming. But even though it happened last winter, it was a life-changing experience, and I still want to share it (now that I have all the photos organized and my thoughts together).

In January, I took a class through California Wolf Center that was one of the most amazing experiences of my life: Wolf Handling and Chemical Immobilization.

Until now, I have only briefly mentioned that I took this class. But now that I finally have everything organized, and I had a recent experience on top of these, I want to share more about it.

The following two blog posts were written just after I took the class (and man am I glad I wrote most of it down then! Funny how the details slip your mind). All photos are courtesy of the California Wolf Center (save for a few of my own).

Many months ago, I decided I wanted to take the wolf handling course that California Wolf Center offers each winter. I’d heard from others who had taken the class that it was one of the most amazing things they had ever done — so my interest was piqued.

I did a little bit of legwork, asking questions about what the class entails and how it could benefit me in the future (with the assumption that we would eventually be leaving the area).

I found out that the class — wolf handling and chemical immobilization — is a nationally recognized course and that how CWC presents it is different from others around the country.

It is more hands-on.

I knew that it wasn’t cheap, but I also knew that I really wanted to attend. Nervous, I pitched the idea to Andy with a plan in mind of how I was going to pay for it (take on extra freelance work from another newspaper I had been writing for).

Since we were trying to save up money to eventually leave California, I knew my timing wasn’t awesome. But I also knew that this may be a once-in-a-lifetime experience. I had to do it.

Let me start by saying that Andy is amazing. He is the most lovingly supportive husband a girl could ask for. He said, “Well, it sounds like you have the money part figured out already. Do it.”

So, I signed up and waited for it to begin.

The class is a three-day course held at the center in Julian, about 45 minutes away from where we were in Ramona. The night before the first class was spent busily getting everything ready for the next day. I packed a bag with everything I thought I might need. I knew the first two days involved a lot of classroom time — there’d be a lot of sitting.

It was an early morning. I woke up around 5 a.m. and got ready. The drive up went smoothly — I love the drive into Julian.

After checking us in, my group of classmates and I found our seats. Most of the people in the class were people I didn’t recognize. Some were volunteers, some were from different zoos around the country (I found a fellow from Chicago and had a nice chat about winter), and some were from who knows where.

I knew almost everyone who was helping to run the course, since I volunteered up there. But I hadn’t met one important person: Carter Niemeyer.

A former government trapper who eventually became an advocate for wolves, working with the U.S. Fish and Wildlife Service as the wolf recovery coordinator for Idaho, he was someone I wanted to meet.

He also hailed from Iowa, Minnesota’s friendly neighbor to the south.

I had started reading his book earlier in the week, and the stories he told were entertaining and informative. I was nervous to say hello, but I knew I’d regret it if I didn’t.

I looked in the book of what we were covering for the day, and my eyes zeroed in on one topic.

Anyone who knows me (and not even knows me well) knows how terrified I am of needles. Yes, I have tattoos, but I am petrified of syringes.

I remember a doctor’s visit when I started crying after seeing the sharps box in the exam room. Andy was holding my hand as the doctor came in. The doctor tried to tell me that I had a cold, and that’s why my eyes were watering so much.

Andy said, “No, it’s because of the needles.”

Andy had to sit on me and hold me down for my meningitis shot for college.

Though I have gotten better (a little) about needles, they are still my biggest fear. Put me in a pool with sharks, and I would feel safer there than near a capped needle sitting on a counter.

I tried not to think about the afternoon lab.

We started with introductions, and I learned about the wide variety of people taking the class, including a rancher from Alberta, CA (more on that later).

I hadn’t been in a classroom setting in eight years. It was different but something I settled into quickly. And I learned a lot.

After Carter introduced himself and told a few stories, I finally got the nerve to go up and introduce myself. I won’t go into how embarrassing that was — my nerves got the best of me. I told Andy about it later, and he said, “Well, imagine if he was that whale guy that you want to meet.”

He meant Ken Balcomb from the Center for Whale Research. And he was right. If I was this nervous meeting Carter, I can only imagine how I’ll feel if I ever get to meet Ken.

Anyway, after learning about several different things, we eventually split up into groups and went outside to practice using different drug delivery methods: a rifle, pistol, and blow pipe. All “loaded” with tranquilizing darts. 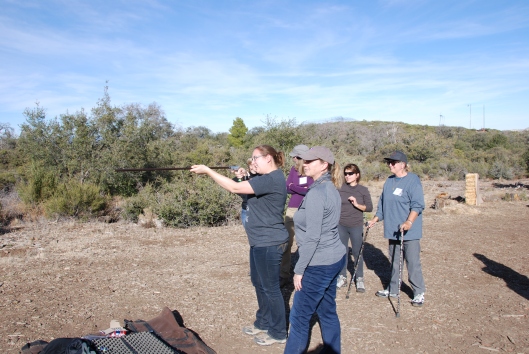 My dad thought it was very important for me to know how to handle guns safely, so I have a good handle on those. And my knowledge and comfort transferred over well to these guns. I wasn’t so great with the blow pipe, but hopefully I will never need to use one.

We also practiced capturing a stuffed wolf with the procedure and tools used during a real capture. 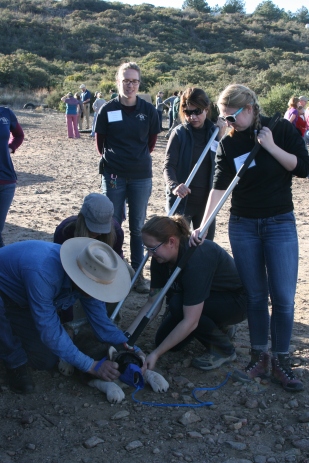 Back in the classroom, we discussed how the labs went. And then came time for the needle lab. I was shaking, palms sweating. I quietly warned my partner that I was terrified of needles. They passed out the bag of supplies: different sizes of needles, syringes, blood tubes, and two bottles of liquid.

Andy and I had talked about this before. I told him that I would do my best and that I wanted to be involved in every part of this process. I was determined not to let my fear get the best of me. The needles weren’t going into me, right? What did I have to fear?

We started the lab, learning how to attach needles to syringes, draw up liquid, use the different collection tubes, etc. My hands were clammy the entire time and shaking slightly. Each time I uncapped a needle, I jumped a little. My partner thought that part was pretty funny, and honestly, so did I.

But I went through the entire lab. I did it!

The only time I got really nervous is when one of the vets came over to talk about needle position. She had me pull my sweatshirt sleeve down, and she pretended that the seam was a vein. She uncapped the needle and tried to talk me through the position, but I couldn’t focus on anything because the needle was so close to my arm. I was shaking like a leaf. She finally capped the needle and resumed her demonstration. I felt silly that my fear had been so obvious, but it seemed as though I couldn’t control it at that point. The needle was just too close and was aimed at me. I apologized but thanked her profusely for taking the time to make sure we understood everything.

I left the center that night feeling very proud of myself. I was riding some kind of high, and it felt pretty great.

Unfortunately, I got to the Jeep and realized the battery was dead. Great. After getting another person to help me jump-start it, I was on my way home. And I couldn’t wait to tell Andy about my day. I was exhausted; my brain was full; but I was more excited than I had been in a while.