I remember last summer in Ramona – and it was hot. I told myself that I would never go through a summer like that again. But here we are.

I think what happened was the nice weather of fall hit, then winter, then that gorgeous spring, and I forgot all about how terrible the summer heat is in this Valley of the Sun. I figured, “hey, it couldn’t have been too bad and the rest of the year is beautiful. I was probably just exaggerating because it was my first summer.”

Here’s what you have to understand about Ramona and Southern California: summer is not the same everywhere – there are countless micro-climates. So Ramona, which is affectionately called “the Valley of the Sun” because it is sunny here 99.9% of the time, is also a valley of heat. When it is 100 degrees here, it is between a 10-20-degree swing in temperature once you leave the area.

So, how do we combat the heat?

Step one: stay inside. Only go outside early in the morning or after the sun has set. That leaves us trapped inside in the A/C quite a bit. But we learn to manage.

We used one of our days inside to make our first batch of soap using the new method, making it out of a combination of oils (including coconut oil) and lavender essential oil. 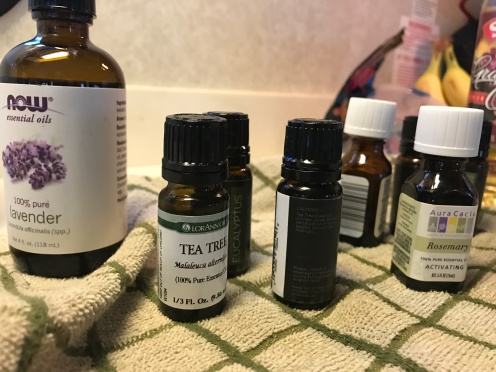 After sitting for so long, our soap bin was quite a mess. At some point, the open container of coconut oil spilled all over the inside of our supply bin.

It was certainly a learning process and getting everything to the correct temperature at the same time took a bit of practice.

But it seems we were successful! Once it has fully cured we will know for sure.

On Saturday, little Theodore and I avoided the heat as best we could.

I ran errands early in the day and spent the rest of the day indoors, working on some of my writing projects (i.e. book). I came up with a decently comfortable way to work so that my computer time wouldn’t bother my neck or wrists (at least not as much as normal). 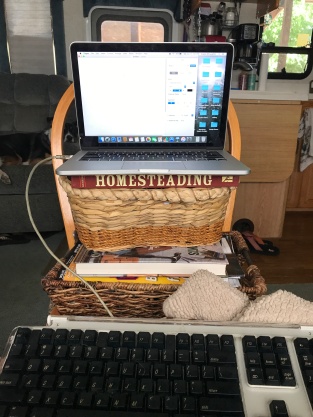 That night, we went up to Julian for a Blues festival and some hangout time with my Wolf Center peeps. Thankfully, Julian was about 10 degrees cooler than Ramona and, though it was still hot, it was a little more bearable.

The sunset was beautiful on our drive home.

On Sunday, we stayed in for most of the day other than covering the park for the attendant who was absent. It was too hot to do much else. 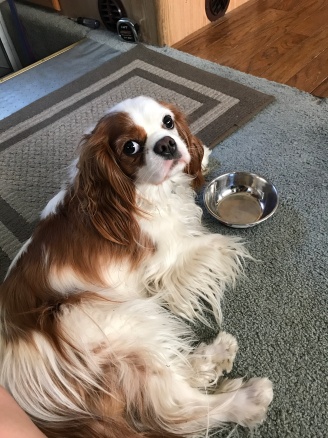 We did go for an evening drive to scout for nature. We didn’t see much other than a turkey but it was nice to get out of the house with the dogs.

We decided to escape the heat on Monday by taking a trip down to the coast. And we brought Teddy and Piper with us.

We started the day by cooling down at the Ocean Beach dog beach. 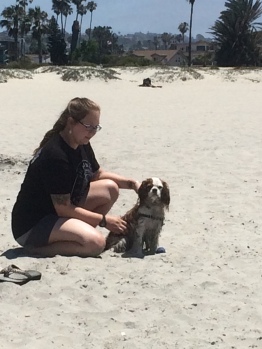 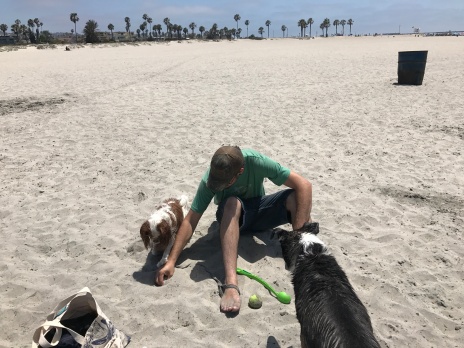 Little Theo did so much better with the other dogs! He is getting more comfortable each time – and I am so happy to see him improving. He seems much better with larger dogs than smaller dogs, and actually approached some of them without barking his head off. I kept the treats handy to make sure he was getting rewarded.

And he learned how to swim!

Piper, as always, had a blast. We had to make her take rest breaks because she just wanted to keep going!

Afterwards, we decided to take them for a walk around Balboa Park. Andy had never been there before and I had only quickly walked through it on my way to the 5k starting point. So, we took our time, meandering through the beautiful buildings and walkways. 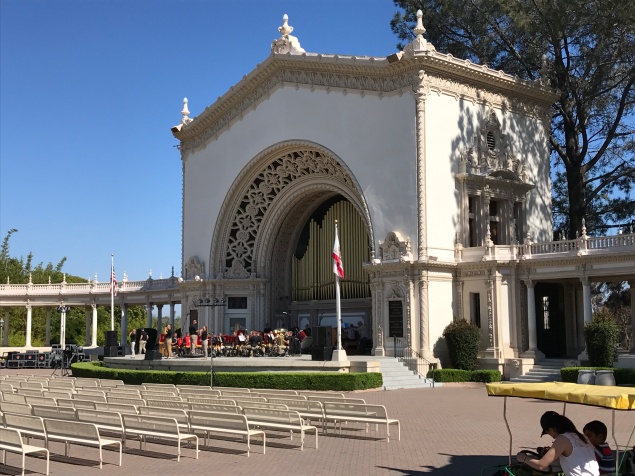 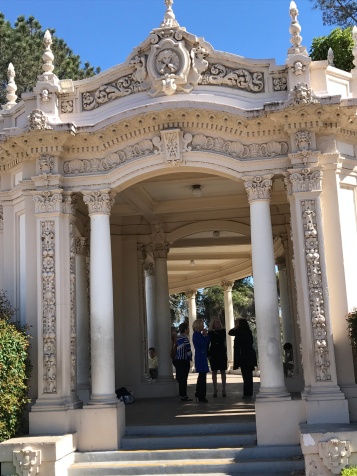 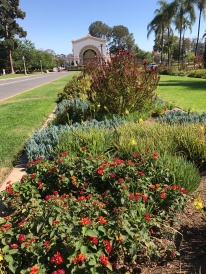 I definitely want to come back to check out some of the museums (future date day)! 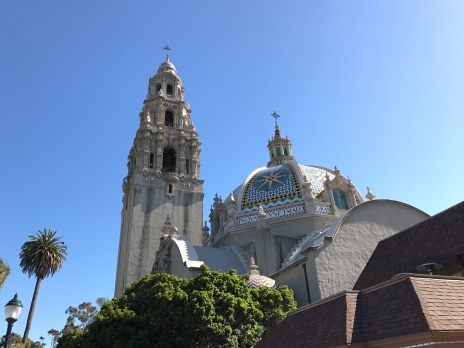 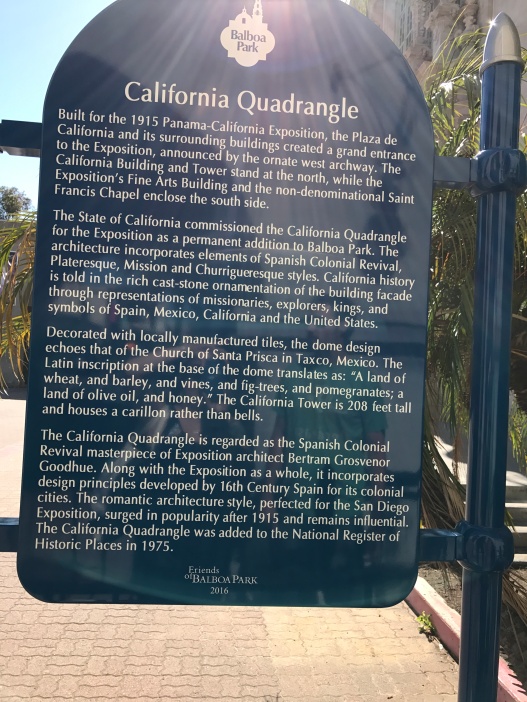 After that, we went out for dinner at a dog-friendly place called The Brew Project. Even though he was tired, Ted got a little yippy during parts of our meal but he did well overall. Piper, of course, was a little angel. 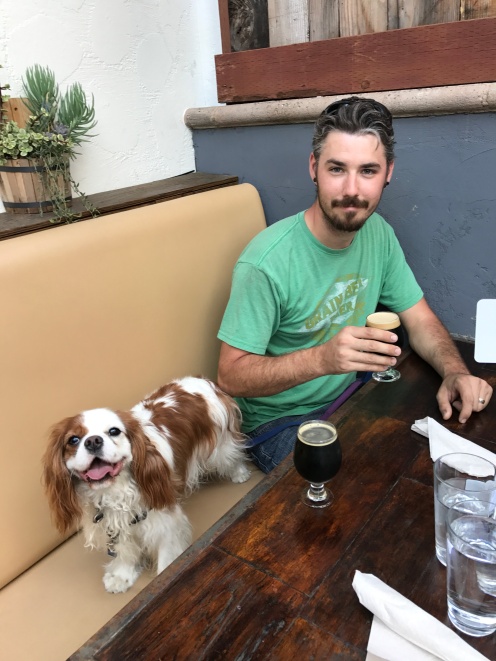 It appears Piper may have over-exerted herself a bit on our adventure, and she is limping slightly. Perhaps beneath all that energy her age is beginning to show – she’s not a young pup anymore! We will keep an eye on it and make sure her next beach adventure is less intense. Poor girl!

Still, I think she likes all the attention…

It was a fabulous day overall and a wonderful way to escape some of the Ramona heat. I’ll be dreaming of the ocean breeze over my next few days in town – it’s supposed to be HOT for the next little while. 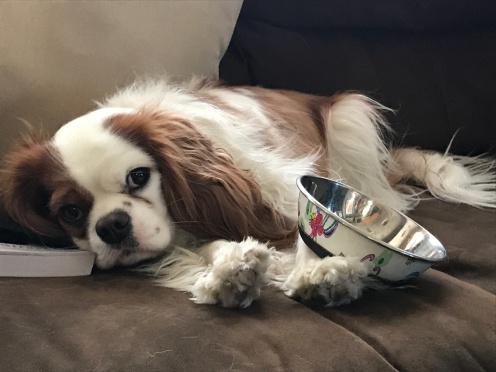