It was a cloudy day down at La Jolla Cove but that didn’t stop people from getting into the water – including us.

Now that school is back in session, we were hoping fewer tourists would be down in the La Jolla area. Three or four times we have driven down there only to be unable to find a place to park (including the $10 pay lot being full)! It has been a bit frustrating and a lot disappointing.

On Monday, we finally had some luck. We left home at 9am to get down there, late enough to avoid rush hour traffic in the city but hopefully early enough to find a place to park so we could go snorkeling. After doing two sweeps around the area in our Jeep, we finally found rock star parking not too far from where we wanted to enter the water.

The first and only time we went snorkeling here was when our friend Trav was visiting us (the first time he stayed with us). Unfortunately, it was during sea lion breeding season and after only a short time in the water, we were gracelessly forced to exit the cove by some boisterous sea lions – which were coming at us open-mouthed and threatening to bite. At the time, I had no idea that they would take this attitude, especially when we were trying so hard to keep our distance. 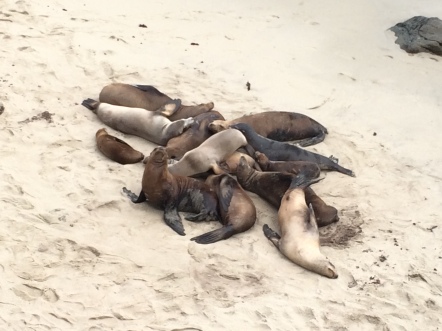 Monday was a different story. Understandably, I was nervous to enter the water with so many sea lions around. I convinced myself it was alright because there weren’t any young pups and other people were in the water.

I watched the other snorkelers and divers in the water for a few minutes, nervously entered the shallow water to get my gear on, and kicked off from shore.

The underwater views were just as impressive as I remember from the first time. The long, green grasses moving in the current with large garibaldi, bass, and schools of colorful fish. I am very upset that our underwater camera is broken and cannot wait to get a new one so that I can share the amazing sights.

The first time a sea lion passed beneath me, I tried to climb up Andy in the water. I was scared that we would have a repeat of last time.

After talking to a couple of other snorkelers, who come here all the time, I found out that what I experienced is extremely rare. They advised to just keep my cool, keep my distance, and not worry about it. They said the young sea lions often like to join snorkelers while they are swimming around. As two of them circled me in the water, one woman said, “they are human-watching the way that you are fish-watching.” 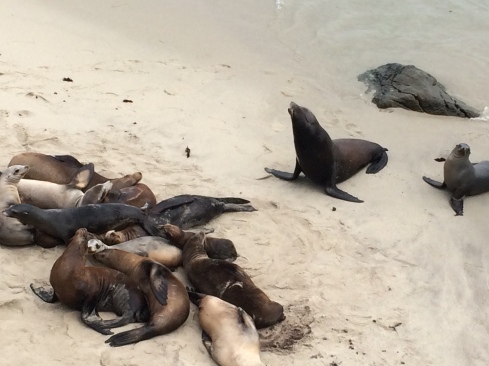 It made me feel better after talking to locals who come here a lot. After Andy returned to shore because he was cold, I snorkeled several laps on my own. And when the sea lions passed below me, I didn’t panic — at least not as much. I lifted my face out of the water, found Andy watching me from shore, and went back to snorkeling. Whenever I’d check in with him on shore, he would point to the nearest sea lion and it made me feel better to have a lookout.

It was an amazing day. 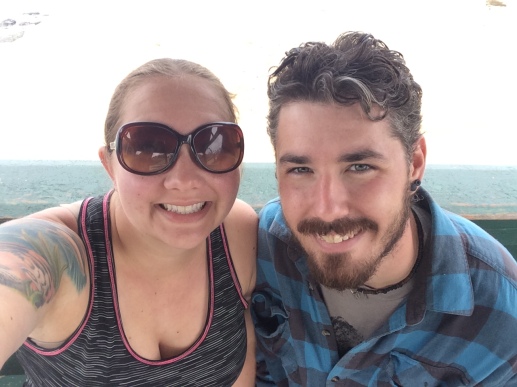 Afterwards, we went to Oceanside to have lunch with Aunt Kris. It has been a while since we have been to the harbor and I have certainly missed it.

To be honest, it has been too long for me since I have even seen the ocean. The first sight of it took my breath away.

We had a delicious lunch together and caught up on what was going on in our lives. I love having family so nearby! 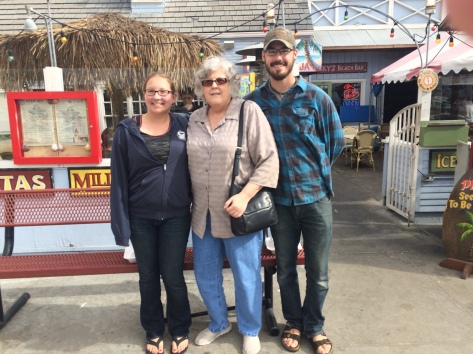 After a wonderful day, it was time to head back home. I was sad to leave the water and, had there been windows on the Jeep, my face would have been plastered against them while I watched the water fade in the distance. I guess I know where my heart is.