The day was cool and overcast, the sun barely peeking out from behind the clouds. I could smell the ocean before I could see it, that salty sea breeze that beckons me closer. We rounded the corner, the tires of the Jeep slowly crawling across the sand as we neared the water. The undulating waves were gentle — and calling to me.

I could feel the excitement rise up inside me, and I knew we had made the right decision.

We were going kayaking, and I was ecstatic.

The last several times we had been down to the ocean were with the dogs, so we didn’t get to go swimming. Though I still got a bit of my ocean-fix from that, it’s not the same feeling that I get when I am in the water — that feeling of absolute peace, tranquility, amazement, wonderment, respect…and on and on.

Just the night before, I’d had a dream that we went kayaking, and we saw dolphins. So, Andy and I decided to go on our own kayaking adventure to see what we could find.

It was a beautiful day. Cool enough to warrant a wetsuit (good for extra sun protection) but warm enough that we weren’t cold. We followed the coastline of La Jolla, making our way to the caves. 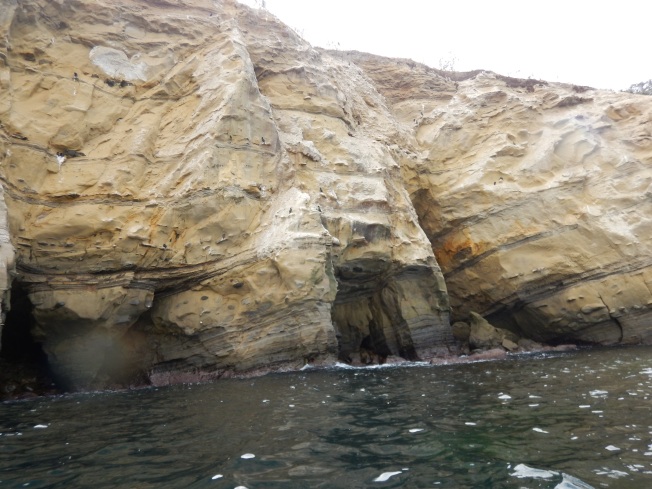 We liked seeing the large number of birds perching on the rocks, all different kinds.

As we neared one of the caves, we realized that we were perched above a spot we had snorkeled over the summer. It was neat to see it from above. When the sun peeked out, we could clearly see down to the bottom — the garibaldi were hanging out in large numbers.

As we rounded the corner of one of the caves, we saw a large sea lion, lazily sunning itself on a rock.

We neared the backside of the cave, unsure if we should enter. 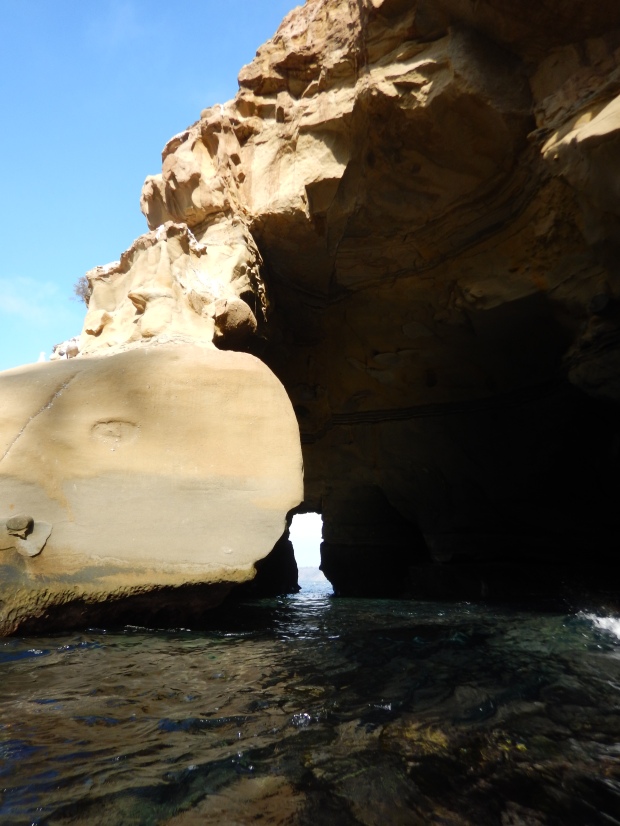 The water level looked fine, and the current was not too strong. We decided to give it a go.

Sorry for the shaky camera footage — I was paddling through the rougher part.

Though we were having a blast, I wasn’t convinced that we were done seeing wildlife. I knew we were going to see dolphins. I could feel it.

So, we headed for deeper water.

We jokingly made a few “dolphin calls,” hoping to catch a sighting. It was a beautiful day, and we were having a blast. And I stayed positive that there was more to come, quietly saying that all we wanted was a short sighting. We came in peace.

Lo and behold, our positivity was rewarded!

I couldn’t sit still enough to take photos, so while Andy gently paddled and I bounced up and down in my seat with excitement, I caught some brief videos of the dolphins.

We believe it was a pod of six. They split up and surrounded our kayak, at one point crossing about fifteen feet off the bow of our boat. I was too excited for this close encounter to mess with the camera, but I hope it will stick firmly in my memory.

After they moved past us, we floated in the kayak for several minutes, just taking in the serenity of our surroundings. Andy nailed it when he said he wished he’d brought a book with. Next time, we will certainly pack a picnic.

We headed back to the beach so we could load the Jeep up again. While I was waiting for Andy to bring it down, I decided to take a swim. The water was perfect, the waves gentle, so that I could just float in the water. 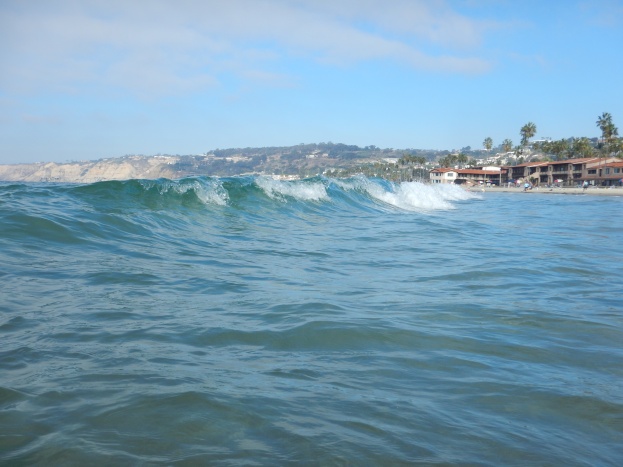 It was exactly what I needed, just a moment to reconnect with myself and with the ocean. I even saw a small nurse shark make its way across the sandy bottom (good thing I had my “I love sharks” shirt with).

We finished off the evening with a tasty dinner from a nearby restaurant.

Then, we headed back home to clean off our supplies. The only slightly unfortunate part of the day? We can’t keep the top on the Jeep when we have the kayak on it because it will ruin the soft top. So, it was a pretty chilly ride home.

But the sunset was amazing.