“Fire extinguisher!”  These are words I hoped to never hear from my husband.

This post is a little delayed since I had poor service at our last campsite.  We have been in coastal Southern California for over a week now.  Our friends Ali and Jared flew into town to visit us and see SoCal so we took a little vacation from our regular activities (can you call it a vacation when you don’t work?)  The following post was actually written 6 days ago:

We are in SoCal spending time with our friends Ali and Jared.  Originally, we booked a campsite on the beach outside of San Clemente; it was basically right on the sand but the downside was that we did not have any water or power at our site.  We determined that it was a fair trade to be right on the water.  When we made this decision, we were under the assumption that our generator would work if we needed power.  We decided we could run it for one hour a day to charge all of our phones and vacuum the RV.  We should have known that nothing really goes as planned in an RV, especially ours since we’ve had so many issues already.

Day One:  Andy and I get onto the coast and set up the RV at our ocean campsite.  The drive took longer than expected but since this is California I think we should’ve expected it.  We had a 1.5 hour delay on the highway for some unknown reason.  After setting up, we went into Oceanside to visit with Andy’s aunt Kris and his grandpa.  We watched the sunset on the water and everything in the world felt right.

Day Two:  Andy picked up Ali and Jared from their hotel by the airport.  It’s raining outside but that’s ok because we can do some indoor activities.  All of our phones are at half a charge and we don’t know our way around.  Andy goes outside to fire up the generator but it’s being tricky.  Jared is pushing the starter button inside, Andy is working on it outside, and I am at the window communicating between them.  Suddenly, I see Andy try to blow frantically on something on the generator.  He looks up in a panic and shouts “fire extinguisher!”  I ripped the entire thing off the wall, ran outside in my socks in the rain, and threw it to him. Luckily, by that time, the fire had gone out.

We quickly scrapped the idea of using the generator during this trip because we wanted to be able to have fun and not have Andy work on it the entire time.  Or set more fires to our home.  We spent the rest of the night enjoying our time in Cali but when we got home later we realized that we needed some sort of power source, and soon.  Our batteries were dying, lights dimming, and furnace squealing in an effort to work with little juice.  This was not a sustainable plan.

Day Three: Today, we decided to search for a new place to stay.  We almost got another site right on the beach but in the two hours we took to get ready and talk about our options, someone had already booked it online.  So we headed up the road to a campground 1.5 miles from the beach but far less busy (no highway noises or coastal train to listen to tonight!)  Lots of confusion and two hours of shuffling later, we found a spot that has water and electric hookups (Note to Reserve America: you kind of stink).

We started getting settled in and I went to take a shower (seriously missing a real shower and not a coin-operated camp shower right now).  I heard the rain pick up outside and on my walk back I saw the damage done to the campground while I was in there.  Huge branches covered the road, trees were uprooted all over one side of the campground.  Other campers were outside taking pictures.  I got into the RV and they all asked me if I was ok.  Confusedly, I said “yes.”  Apparently, when I was in the shower, the storm picked up and rocked the RV so hard to one side they all thought it might actually tip.  Andy is convinced that if the slide had not been out or the jacks down, we would have.  A tree went down on our electrical box. State Park officials came out and asked if we were ok, if anything was damaged.  They told us it was a “mini-tornado” and that several had been spotted in the area.  Wow!  I didn’t expect that in Cali.  Flash-flooding, mudslides, and earthquakes I expected (those happened too).  But tornadoes are not common here. 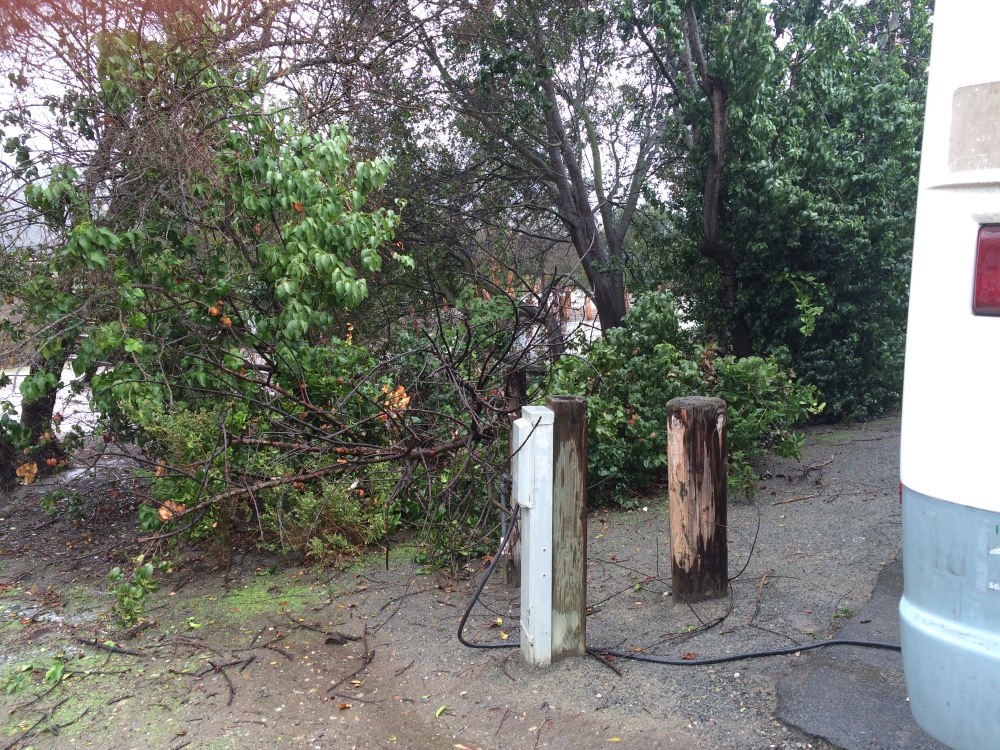 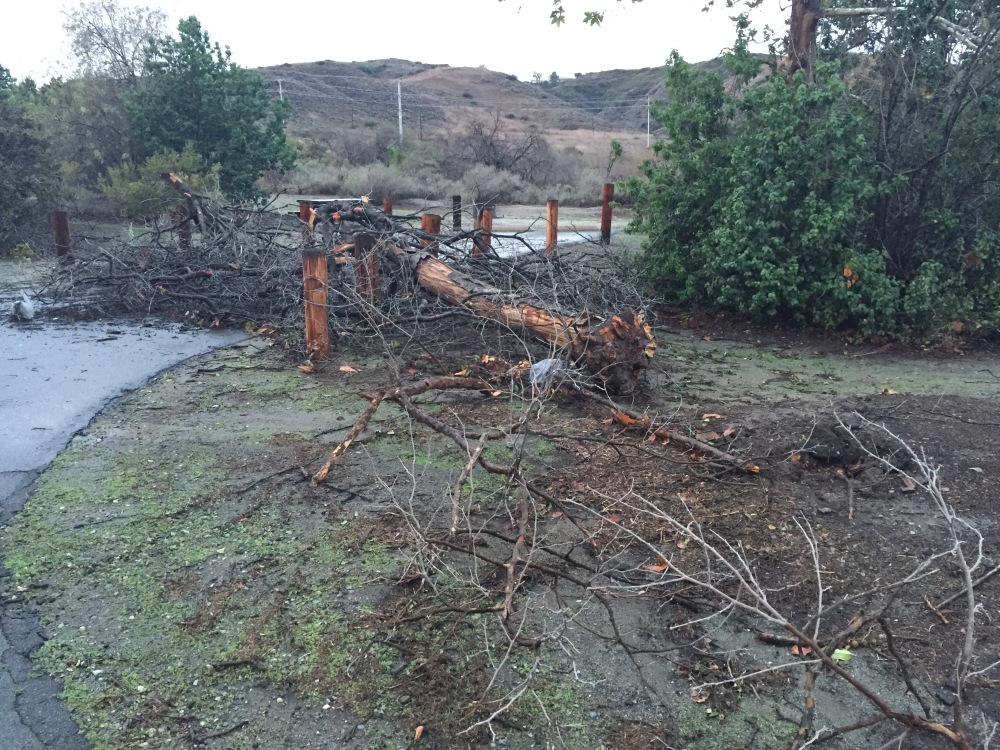 Instead of going wine tasting today, we decided the safer choice might be to stay in, play games, and do our own wine tasting in the hopeful safety of our tin can, The Wandering Dolphin.  Staying here seems to be safer than going out on the roads anyway!  It’s supposed to clear up tomorrow and then maybe we can get a little more of the Cali weather we are so craving!