It has been a few days since we have able to post but our experiences have been quite interesting.  The following post was written a few days ago, when we were not anywhere near cell service.  Enjoy!

I am writing this from the dining room table of our RV, as the storm rages outside.  Today is November 17th and we are in Northern New Mexico.

We got in two nights ago, after driving through the most boring stretch of land I have ever seen (Western Oklahoma in the panhandle—I didn’t know anything could be worse than Iowa).  Immediately upon entering New Mexico, things got more interesting.  The scenery started to change and we could see large hills in the distance, almost plateaus.  Our campground is small but when we arrived, there were four other campers here.  Everyone seemed really nice; we talked about hunting with one of the groups as another came over to meet our dogs.  We got in around sunset so we didn’t have much time to look around but we did see that there were rabbits everywhere and that we were on a small lake in the middle of desert.

Yesterday, we decided to tour the place a bit.  We got all loaded up with our hiking gear—we always take a backpack with water, granola bars, and a first aid kit—and hooked the dogs up to their harnesses.  The state park we are in, Clayton Lake, boasts being a site where dinosaur tracks can be seen.  We decided to take the walk down to see the tracks.  It sounded pretty cool! 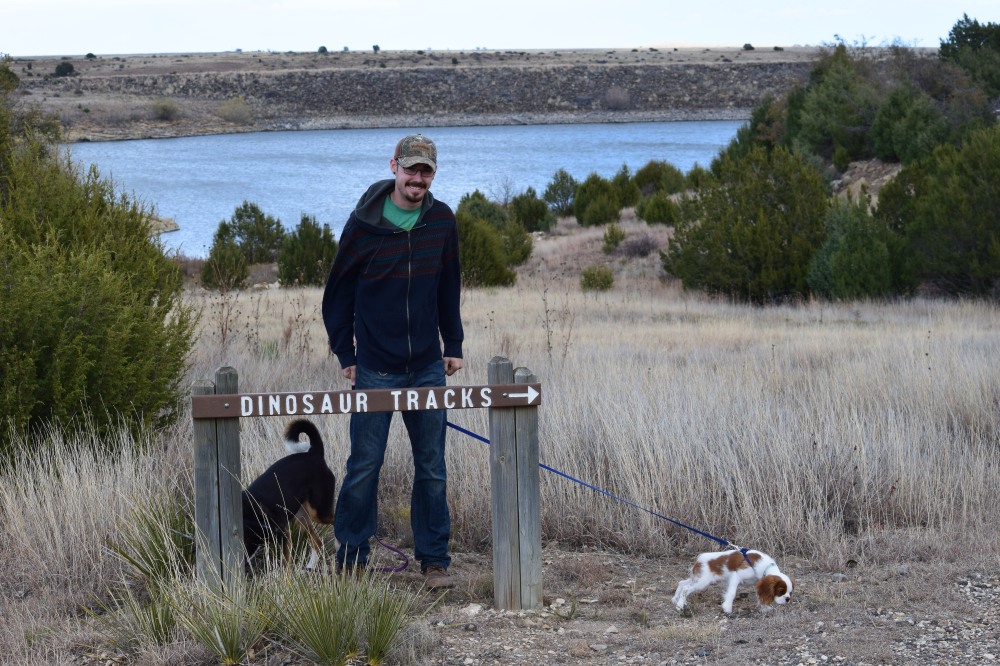 Though it was a pretty short hike compared to what we have been doing, it was a difficult one.  The wind was blowing 40mph and we were being pushed sideways by it.  It had rained in the morning but the dust being kicked up was still a pain to deal with.

Finally, we made it to the site.  After reading all the info about the place, we were excited to take the boardwalk around and actually see where dinosaur footprints had been preserved.  Our first impression: they looked like indentations in the ground and could’ve been anything.  Apparently there are over 50 prints that can be easily seen but to us, they looked like puddles.

We did see one that was more distinct and that was pretty cool.  It was harder to appreciate it after our disappointment with the rest of the site but we stared at it for a while and truly thought about what we were looking at.  And really, that is pretty darn amazing.  I mean, how long has that been there?  It was even more amazing to us that researchers can tell what those indentations are.  I would’ve walked by not giving it a second thought.

We didn’t stay at the site for long because the wind was making things pretty miserable.  We hiked back to camp, jumped in the Jeep and drove around to tour the rest of the camping areas before we showered (we needed to get the dirt that was imbedded in our hair out).  We decided that it would make for the perfect indoor day so we made some jewelry for a while and then baked two pumpkin pies.

Our campsite cleared out that day until we were alone.  The wind was still roaring and it made the RV shake like crazy.  We looked out later and another camper had pulled in, unheard over the wind.  They were in a conversion van.

The wind continued howling through the night and eventually, we heard rain too.  Around 5am, it was so loud that neither of us were sleeping and our fans had shut off.  We had lost power.  I got up to get water, looked outside, and saw white.  It was snowing and coming down fast.  I could faintly see the neighbors across from us; they were outside checking their electrical hookup.  Andy got up and went out to talk to them.  They said the power had gone on and off several times and they were going to leave (they did not have a heat source other than their car battery without that electrical hookup; we have a propane heater).  He asked if they knew the temp and the woman climbed into the van to check.  She yelled out, “all it says is ‘ice!’”  So we knew it wasn’t going to be good.

We discussed what we should do for a while and decided that it was too risky for us to try to hook everything up and leave in the dark in this kind of weather.  We still had heat, water, and food.  No electricity but if we got desperate, we could try to fire up the generator that we have never used.  Once the sky grew lighter, we finally fell back into a fitful sleep, getting a couple more hours.

I got up to take the dogs outside and the wind ripped the door from my hands.  I could barely see them on the ground in front of me.  They quickly did their business and I got them back inside; Theo’s first introduction to snow was not a good one.  We knew we had to make a decision.  We were going to have to stick out the storm until it got better.  We had paid for two more nights already and all we could hope for is that tomorrow or the next day would be better driving weather.  But with this wind and snow, it was more dangerous for us to move than it was to stay where we were.  With this decision taken care of, we set about cold-proofing the RV as much as we could.  It is insanely drafty with this much wind.

We moved Pica away from the front windshield, onto the dining room table.  Then we put sheets, blankets, and towels all around the front driver’s area, where the coldest blasts of air were coming in.  We laid towels on the areas of the floor where there wasn’t a “basement.”  We kept all of our blinds closed because they insulate somewhat. 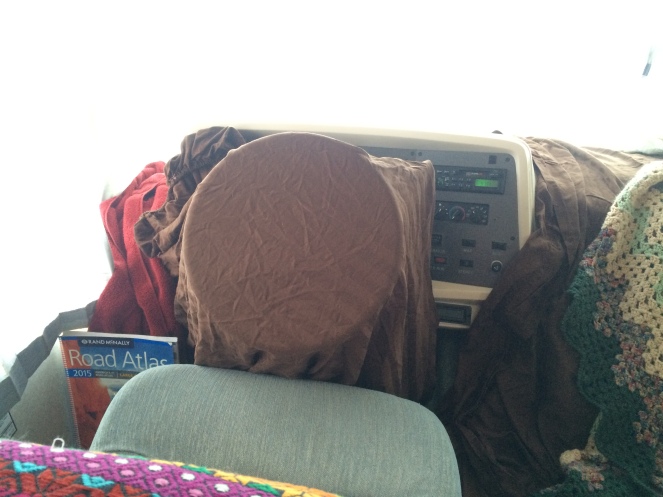 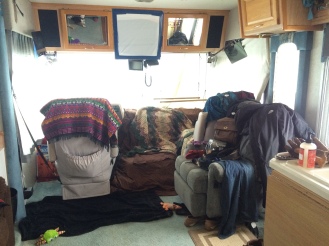 The whole time, we were listening to the radio for updates on the weather.  They said we had a blizzard warning until 5pm.  Did I mention that we don’t have ANY cell service here?  We are literally stuck in the middle of nowhere in a blizzard unable to tell anyone what’s going on.  The closest town is 11 miles away.  It would be more terrifying if we weren’t from Minnesota.  But isn’t this part of the reason we left Minnesota? 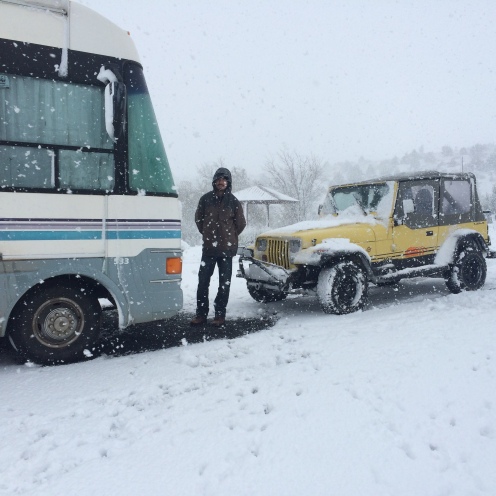 So the DJ is telling people not to leave the house and not to drive.  He is amusing us with his version of the weather report, “it’s cold, windy, and snowy.  That’s all you need to know.  If you need to go from here to there, you can’t, so don’t go outside.”  And they’re right, it is pure icy, windy, snowy hell out there.  Several of the major highways are completely shut down out here due to ice and accidents.

We are still 2/3 full on propane so we can wait it out a little longer.  I am worried about our water lines freezing and without the power on, our heat light that we have on the lines is not working.  Our power has been coming and going in spurts.  Tomorrow is a high of 57°.  If we can get a break in weather, we are going to clear out of here and head to Colorado.

This afternoon, we took a quick journey out, drove about five miles down the road so we had enough cell service to tell our parents what was going on and that we were ok.  It’s a good thing we didn’t decide to leave in the RV; the roads were pure ice under the snow and there is no way we would’ve made it out of the park.  We had to put the Jeep in 4wd just to make it up the hill.  The drive went alright in the Jeep considering it’s the first time we’ve ever driven it in the snow.  When we got back, we decided it was a great idea to play in the snow for a while.  We attempted but failed at building a snowman but we had a blast playing with the dogs.

Afterwards, we came in and made pumpkin soup out of the leftover pumpkin we had from making pie last night.  It helped warm us up a bit.  We’ve had power since midday but the storm is still raging outside.  It picked up after we came in from playing with the dogs and if anything, it has gotten worse.  Hopefully, this long rant of a post will be put up tomorrow or the next day.  For now, we are cooped up inside, trying to stay warm and find stuff to do.  I didn’t expect this in New Mexico! 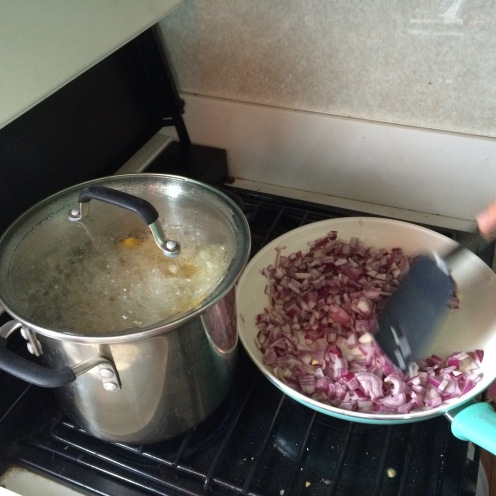 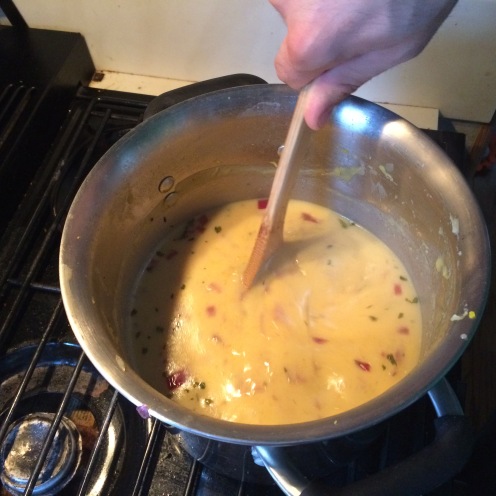