I wanted to start off by sharing some cute pet pictures to hopefully brighten someone’s day — these are all from last week. I take a lot of pictures of our critters… 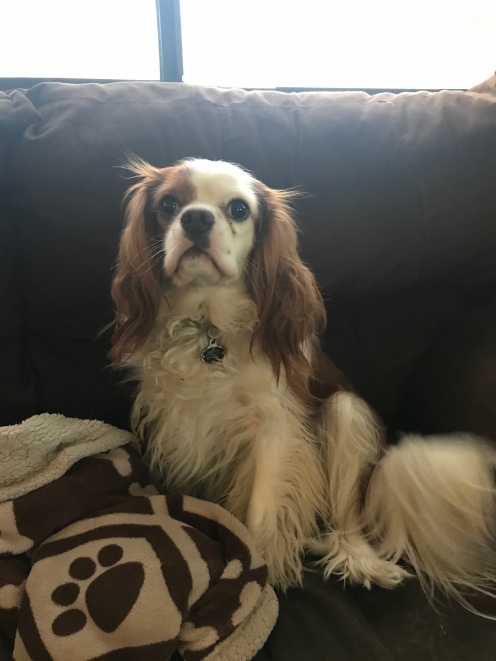 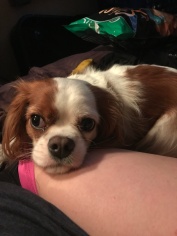 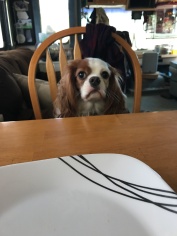 A couple of quick updates:

Now that we decided to keep our Jeep, we added an awesome new tire cover to protect our spare (thanks Jesse!).

We took a trip to Costco and remembered exactly why we can no longer shop here. Everything is gigantic and not at all RV-friendly!

Still, we found a couple of items that we made work in our tiny, tiny pantry.

Both dogs were excited with their new toys — and Piper had a good birthday celebration. 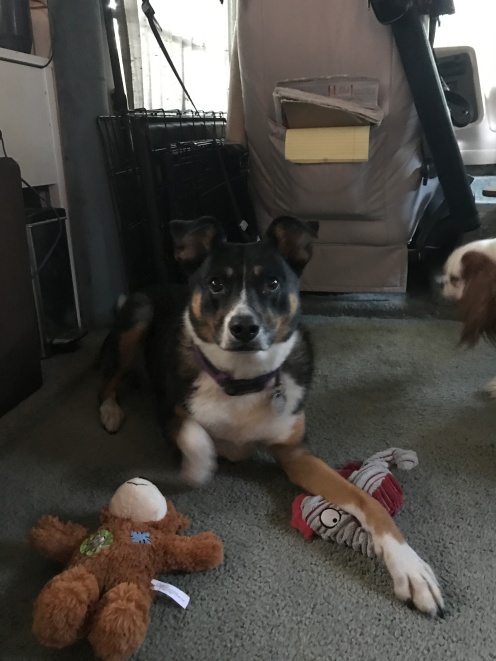 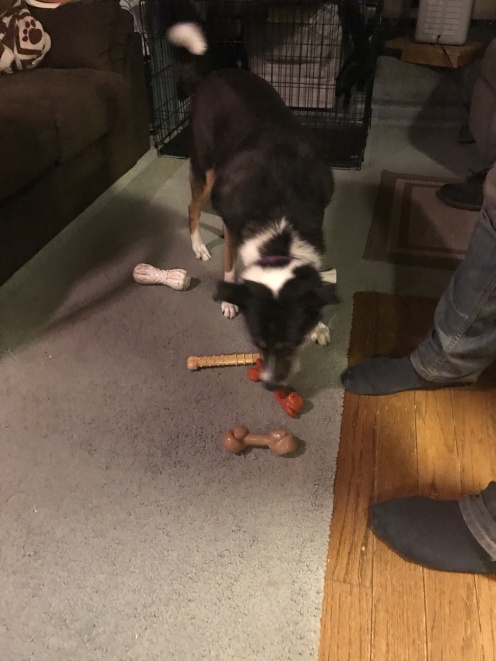 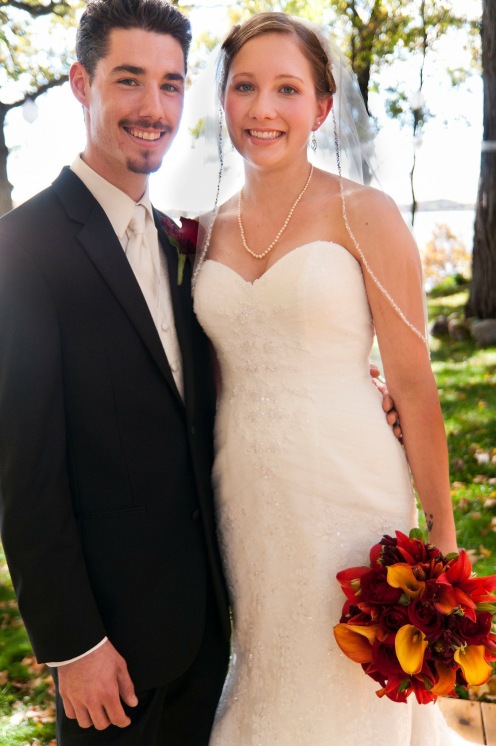 We’ve done so much in the past seven years, it seems a little crazy to think about where we were and where we are now.

The traditional gift for a seven year wedding anniversary is wool or copper. Andy and I both decided to go for copper. Having not discussed our gifts in advance (other than to remind each other not to spend a lot of money), we certainly came out with similar gift ideas.

I found the whale key chain on Etsy and thought it was hilarious (and totally me). With my love for whales and silly jokes, I couldn’t resist giving this to Andy as the copper part of his gift.

He had a similar idea, though his was far more creative and time-consuming.

Andy found pennies from 2010 (the year we were married) and cut them into shapes — two whales and a whale tail. He knows how much I love whales/sea life, and he took the time to create something this cool. If we ever felt there were winners and losers in the game of gift-giving, Andy would be the clear winner! Love it!

We decided to spend both Sunday and Monday celebrating together — because why not? The point in not working all the time is so that we can be together and experience life.

On Sunday, we decided to hang out with the dogs in San Diego. We went to a park near Seaport Village and walked the dogs around for a while. It was a beautiful day.

Then we decided to go into the Gaslamp Quarter in downtown SD.

After parking, we took the dogs for a walk around the city, stopping at one of our favorite little restaurants where we had some beer and split a delicious appetizer.

The nice part about San Diego is that it is very dog friendly. Our little critters got to spend the entire day with us, including both of the places we stopped at for food and beer!

Instead of going out to just one fancy restaurant for dinner, we decided to stop by a couple of places for beer and appetizers. It was definitely enough food for the two of us! And our day around town with the dogs wore them out.

That night when we got home, we played games and watched a movie while the dogs rested.

Aside from wanting the spend the day with the dogs, our other motivation for bringing them with us for the day was to wear them out a bit in preparation for our actual anniversary day.

You see, Andy had the fantastic idea of going to a new aquarium — one we haven’t been to before (you can tell he totally loves and gets me since he came up with this idea and he knows how much I love aquariums!).

He suggested that we go to the Aquarium of the Pacific, which is more than two hours away in Long Beach, CA.

I was thrilled with the idea but it would mean leaving the dogs home for a long day without us. Monday morning rolled around and they were still exhausted from our big day in the city. We hit the road after the worst of morning rush hour was over.

On the way, we stopped at Jimmy John’s.

I get it — it doesn’t sound like a big deal. But those of you that know me know that I love JJ. I used to eat it once a week at work as a reward for having to “close” the store. And there isn’t one anywhere near us now that we are in Ramona, so this was a special treat for both of us.

Finally, we reached the aquarium.

And it was pretty awesome.

We got to see all sorts of critters, from the normal tropical fish to sharks, rays, and much more. Including this super cool jellyfish:

Look at those colors changing!

We spent a few hours checking out the exhibits and all the animals before heading out. 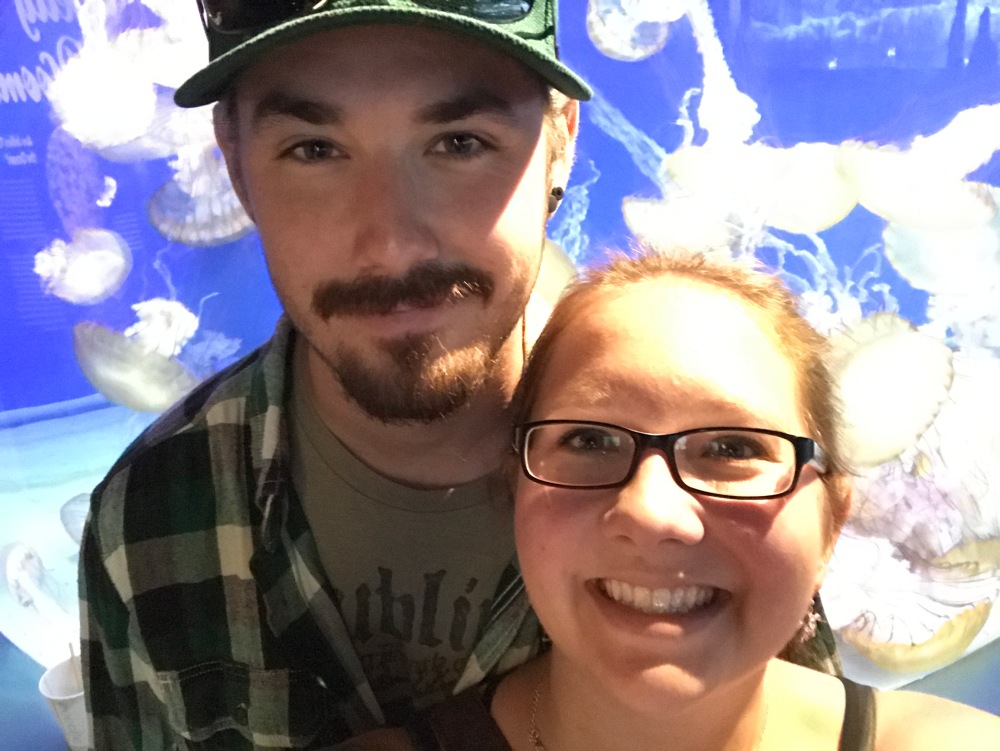 Before hopping back into the car, we decided to take a walk to a nearby lighthouse. It was another beautiful day, and we enjoyed sitting on the bench, watching the boats go by.

We have been talking a lot about where life will lead us next, what the future will bring, and where we want to go. One idea that had come up is a hiking adventure. With this in mind, we decided to stop by a local store to check out the supplies we would need — we figure that the right gear will last us many years and be helpful on many of the future adventures we are talking about.

There is so much that we want to see and experience that we almost don’t know where to begin. We have started making a list of ideas — and we have started planning a route for the next leg of our journey.

After getting back home and taking the dogs for a walk, we knew we couldn’t spend our anniversary without a little more pumpkin.

The rest of the night was spent with our furry little buddies. Piper and Teddy were really happy to see us after the long day. 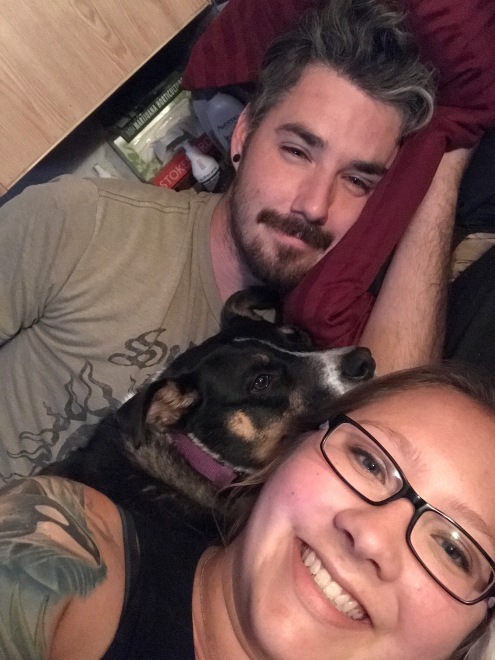 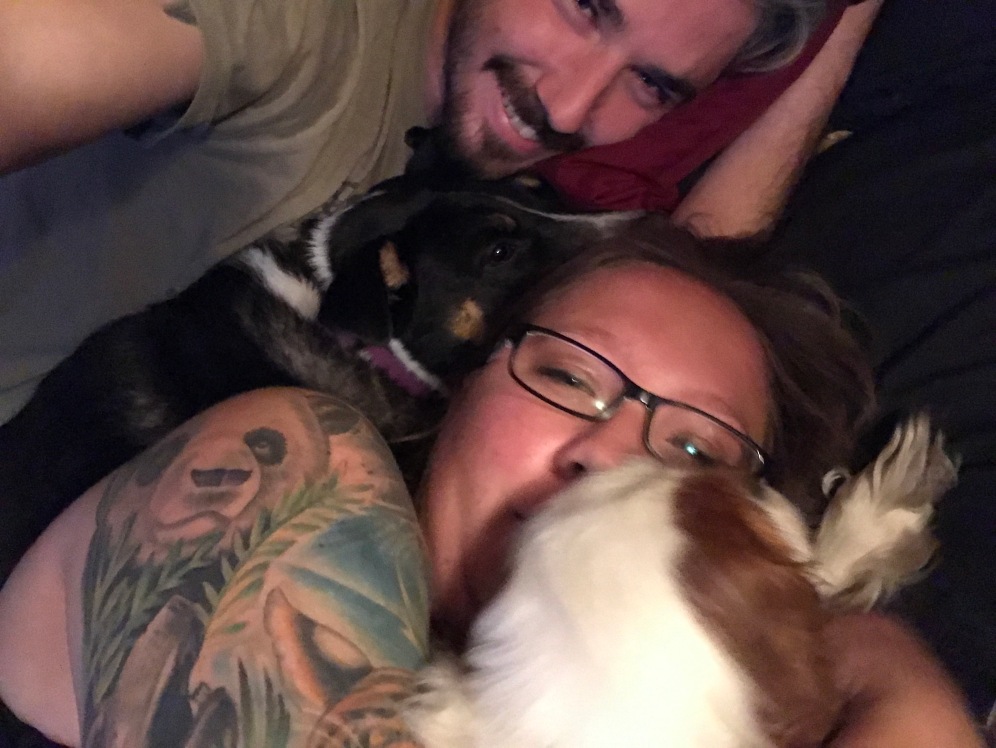 Every day, I am thankful that I have a partner who encourages me, who loves me for who I am, who believes in my abilities, who trusts me, and who is always up for an adventure. I couldn’t ask for a better person to share my life with.